It’s not easy obeying God when He wants you to do something opposite of man or the rest of the world – but isn’t that how it’s always been in the Bible.  Paul did say that Christians would be persecuted for standing up for the Lord. It’s especially not easy when you could be mocked or lose your job, church, retirement income, and possibly even your life for taking a stand for Christ. Remember all the wrath that Noah took from everyone for years!  Nehemiah built a wall with men lying about him to try and stop him from completing it and threatening him with those in government. Elijah having a showdown against his government of King Ahab and Jezebel and then having the fire from heaven come down on his altar and then killing all of the Baal and Ashtoreth prophets of Jezebel and then having her threaten to kill Elijah.

25 The fear of man brings a snare, But whoever trusts in the Lord shall be safe.

Recently several bold pastors around America have been taking stands against their state governors who have been trying to force them to stop having church services (blaming the pandemic using new very suspicious growing numbers of people supposedly testing positive for the virus).   Many people who have gone to get tested but then had to leave due to the long lines are being called back and told that they have CV-19 even though they never even got tested.  Then those who actually do get it are seeing an almost 99% recovery rate. Many national stores are now trying to force all people to wear masks to be able to shop even though it has been proven the masks do not stop the CV-19 virus and can cause people to have dizziness, headaches and sickness in their lungs from not having proper oxygen levels to breathe in.

The next thing they have talked about doing is forcing people back in their homes again and closing down businesses once more.  There has also been talk of trying to get people to take a dangerous vaccine next that could cause people to get even sicker in the future or worse – not to mention how this is laying the groundwork for people being forced to take the mark of the Beast talked about in Revelation 13 and not being able to buy or sell. 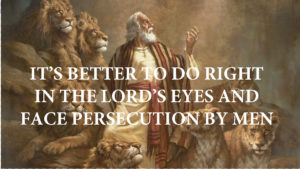 Have you ever thought about Daniel who made the decision to not submit to the law of the land in his time?  Several leaders of his time were jealous of Daniel so plotted against him to have King Darius sign into law an edict that would not allow him to worship God.  He knew if he defied the King’s law and did not obey that he would be killed, yet chose to honor God and not the government and then God honored him.

Let’s read the true story of Daniel’s governmental defiance in text and see what happened to him for defying the local government’s edict and honoring God:

The Plot Against Daniel

6 It pleased Darius to set over the kingdom one hundred and twenty satraps, to be over the whole kingdom; 2 and over these, three governors, of whom Daniel was one, that the satraps might give account to them, so that the king would suffer no loss. 3 Then this Daniel distinguished himself above the governors and satraps, because an excellent spirit was in him; and the king gave thought to setting him over the whole realm. 4 So the governors and satraps sought to find some charge against Daniel concerning the kingdom; but they could find no charge or fault, because he was faithful; nor was there any error or fault found in him. 5 Then these men said, “We shall not find any charge against this Daniel unless we find it against him concerning the law of his God.”

6 So these governors and satraps thronged before the king, and said thus to him: “King Darius, live forever! 7 All the governors of the kingdom, the administrators and satraps, the counselors and advisors, have consulted together to establish a royal statute and to make a firm decree, that whoever petitions any god or man for thirty days, except you, O king, shall be cast into the den of lions. 8 Now, O king, establish the decree and sign the writing, so that it cannot be changed, according to the law of the Medes and Persians, which does not alter.” 9 Therefore King Darius signed the written decree.

Daniel in the Lions’ Den

10 Now when Daniel knew that the writing was signed, he went home. And in his upper room, with his windows open toward Jerusalem, he knelt down on his knees three times that day, and prayed and gave thanks before his God, as was his custom since early days.

11 Then these men assembled and found Daniel praying and making supplication before his God. 12 And they went before the king, and spoke concerning the king’s decree: “Have you not signed a decree that every man who petitions any god or man within thirty days, except you, O king, shall be cast into the den of lions?”

The king answered and said, “The thing is true, according to the law of the Medes and Persians, which does not alter.”

13 So they answered and said before the king, “That Daniel, who is one of the captives from Judah, does not show due regard for you, O king, or for the decree that you have signed, but makes his petition three times a day.”

14 And the king, when he heard these words, was greatly displeased with himself, and set his heart on Daniel to deliver him; and he labored till the going down of the sun to deliver him. 15 Then these men approached the king, and said to the king, “Know, O king, that it is the law of the Medes and Persians that no decree or statute which the king establishes may be changed.”

16 So the king gave the command, and they brought Daniel and cast him into the den of lions. But the king spoke, saying to Daniel, “Your God, whom you serve continually, He will deliver you.” 17 Then a stone was brought and laid on the mouth of the den, and the king sealed it with his own signet ring and with the signets of his lords, that the purpose concerning Daniel might not be changed.

Daniel Saved from the Lions

18 Now the king went to his palace and spent the night fasting; and no musicians were brought before him. Also his sleep went from him. 19 Then the king arose very early in the morning and went in haste to the den of lions. 20 And when he came to the den, he cried out with a lamenting voice to Daniel. The king spoke, saying to Daniel, “Daniel, servant of the living God, has your God, whom you serve continually, been able to deliver you from the lions?”

21 Then Daniel said to the king, “O king, live forever! 22 My God sent His angel and shut the lions’ mouths, so that they have not hurt me, because I was found innocent before Him; and also, O king, I have done no wrong before you.”

23 Now the king was exceedingly glad for him, and commanded that they should take Daniel up out of the den. So Daniel was taken up out of the den, and no injury whatever was found on him, because he believed in his God.

24 And the king gave the command, and they brought those men who had accused Daniel, and they cast them into the den of lions—them, their children, and their wives; and the lions overpowered them, and broke all their bones in pieces before they ever came to the bottom of the den.

To all peoples, nations, and languages that dwell in all the earth:

Peace be multiplied to you.

26 I make a decree that in every dominion of my kingdom men must tremble and fear before the God of Daniel.

For He is the living God, And steadfast forever; His kingdom is the one which shall not be destroyed, And His dominion shall endure to the end. 27 He delivers and rescues, And He works signs and wonders In heaven and on earth, Who has delivered Daniel from the power of the lions.

So he obeyed God trusting Him in faith, and God did a miracle by protecting him from the deadly lions by closing their mouths – and then vindicated him by killing his enemies and their families.  Then Daniel prospered and received favor from not only King Darius but also King Cyrus.

There are many pastors who are now bowing down in fear around the world of submitting to their ungodly governmental leaders and local officials and what might be done to them if they choose to have church services. Instead of standing up with God and having church and seeing God bless them in ways they could not imagine for honoring the Lord they are shutting down or going online due to the government trying to force them to submit.  Now many of their members are not attending church anywhere or watching some of the services online alone instead of how God intended with other people.  Can you imagine Jesus and the disciples wearing masks and stopping all of their meetings?  I know it’s not easy but people need to discern in the spirit what is really going on and doing what God wants us to do and not bowing down in fear to those in charge who do not have our best interests at heart.

God will bless and honor those who are His remnant who choose to obey Him when the government tries to stop God’s people from doing what the Lord wants.  The Lord told me to continue traveling and doing ministry near the end of March instead of shutting down like everyone else was doing.  So I continued to minister in Las Vegas, all over California, Portland, OR, Seattle, WA, Billings, MT, Gillette, WY and Colorado Springs, CO.  Not one person who attended the meetings got CV-19.  Then He recently told me to start going into hotels and doing ministry since the churches were largely shutting down – so I ministered in Minneapolis, MN in July and saw people come from Florida, Texas, South Dakota, Nebraska, Iowa, Wisconson and Minnesota.  Now in August God is having me go back to Minneapolis, MN, West Des Moines, IA, Omaha, NE and beyond as more people are hungry to attend them to get freedom from their past pains.

We need more Daniels to rise up on every level in the world – even though it definitely is not easy – but would you rather be persecuted and hated on by people instead of meeting God on judgment day and having Him tell you that you missed the mark by bowing down to man instead of obeying Him?  The enemy does not want you to do anything for Christ and to submit to man and stay at home. If God can protect Daniel from the mouths of lions I am sure He will protect you from a virus for honoring Him. We can do this people – do God’s will and not man’s!