It is amazing to watch people’s eyes when they have believed something to be true that ultimately turns out not to be true, whether it is from a personal level, community level, state level or world level. They are in shock first, then angry at those who lied to them. It’s like when you are a parent and have believed one of your children over another. You may have taken action to give a negative consequence to the one you thought deserved it. Then later when you learn that your first child lied about their sibling – now you are really upset over the injustice that was done to the true victim.

The enemy knows that when he can convince people that a person is bad when they are actually godly and good then that person will usually not be able to do much for God as people will turn away and shun them. The same principle happens when the enemy can convince people of an agenda that sounds good but it actually turns out to be bad for people. Then when the people actually become aware of the truth they get very angry at those who lied to them. Then the people who lied to them usually will manifest to try to prove that they told the truth instead of the lie – they will get angry, twist the truth more about the person who had the guts to speak the truth, and especially come against the character of the person. It resembles a Hollywood movie where you are not sure who you can trust is the good guy and who is the bad guy. The whole movie the main character gets deceived by the bad guy until the very end and then learns the truth that who he thought he could trust was actually out to kill him. It is like you see in a lot of love movies – where the woman falls in love with a man believing he is a good man only to learn throughout the movie that he was a bad man and was out to hurt her or steal money from her or control her and then another man that she met who was just a nice, kind, loving man was actually the man of her dreams. Often times we see in relationships where people get blinded by the counterfeit first or 2nd person who acts like they are good and godly and love bomb us early and often only to turn out to be filled with demons who want to control and hurt us and stop us from our godly calling. 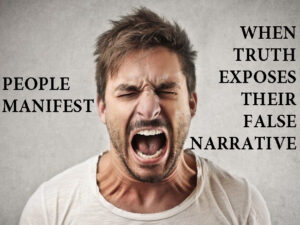 This is how the enemy works through people on earth and it is a very real situation. Many times those who appear to be godly and good will gain a person’s trust initially and it lasts for a few months or maybe even a year. Such as on Facebook people will begin to connect with a person by becoming their friend. Then they start liking all of their posts which can then lead to hearting every post. Then sharing every post and finally connecting with them in person. Then they begin to date and eventually marrying – only to learn in a few weeks that the person wants to control and manipulate you to stop you from helping people and loving on them like Christ. Then they try and shut you down from all your other normal relationships as they want to own you. Eventually you may start to tell the truth about them to a friend or family members or maybe even your local pastor or counselor to try to have them get help but then they will manifest and begin lying about you and trying to control the situation with a false narrative about you. As long as they can convince enough people that their false narrative is the truth (such as telling them that you are the one with the problem) then they can control you and win. But as soon as you are able to get the truth out to enough people to believe the truth instead of your false narrative then they lose. Then they manifest on you and will lie more to others trying to get them to believe that they are telling the truth instead of you.

That is what is going on in individual’s lives, marriages, churches, communities, states, countries and nations around the world. The enemy wants people to believe lies in order to control and stop them from experiencing true freedom in life and doing things for God. As soon as we believe the truth then the false narrative begins to die and their evil agenda can no longer succeed.

The spirit of Jezebel loves to control and manipulate godly people who hear from the Lord by getting people to believe lies about them and turning others away from them so they cannot carry out God’s plans. Jezebel weaves a web like a spider getting people to believe false things about good people so they cannot get support, help, encouragement, connections, financing, donations, cars, advertisement, promotion, etc to continue with their godly agendas. Then what God wanted them to do fails. But when people begin to expose the truth of the evil one’s false agendas the bad guys and girls will rise up like Jezebel and demand you to believe them and their false narrative instead of the truth or they will accuse their victims to try and get them to cower to them in fear. They often come against the person’s character to try to get people to believe that they are evil.

The same thing goes on in larger agendas in society and this world when bad people want to serve themselves by controlling the good people by setting up false narratives. How many false narratives are we all believing? Probably hundreds when you take into account friends and family members as the enemy wants you to believe good things about bad people and bad things about good people. There is such a need to learn to discern the truth and pray for the Lord to show you a person’s intentions.

It is so important to truly know the character of a person and if they have a godly heart and fruit of the Spirit or not.  So many people in the church are great impersonators to act like they are godly when they are actually perverse and evil and will go from being your ally to your adversary.  I remember one woman who was in ministry who had a large following on her Facebook group who told me that another woman with a competitive ministry was a “Jezebel.” So I believed she was telling me the truth…until I was interviewed by her on social media and I could start to sense she had a very angry vindictive side to her wanting to “expose” people and shut them down. She told me she had a lot of ministries who did not like her because she would expose them. Then I learned the truth about her and then discovered that the woman she accused of being a Jezebel was not at all but rather she was a godly woman. Then I learned the truth about the woman who lied about the other woman and she began to manifest on me. She threatened me if I would not do ministry with her. She called people to try to come up with an evil narrative that was false about me to try to shut my ministry down. She said she would expose me. This was called manifesting as the demons in her were raging against me. So the Lord told me to remind her of the truth about her and she finally stopped threatening and I never heard from her again.

People with the spirit of Jezebel like to bully people into doing what they want – often through threats. But when you stand up to Jezebel they will usually scream and yell and threaten more and accuse you of things that often they are actually doing. This is called manifesting and there are so many people who are doing that today. Some are doing it as their worldwide evil agenda is being exposed. Some do it in churches when their lies and sin are found out. They will try to get more people to believe lies about pastors and other leaders who were their victims if they don’t get in line with obeying them.

So when the truth comes out about diabolical evil schemes and agendas you will see those in charge who are evil who will act crazy by yelling and screaming, accusing their victims of lying and trying to twist their character. They will literally behave in crazy ways because their demons that have tormented them forever will cause them to rise up and try to kill their victims for exposing the truth about them. So do not cower to a bully…but stand up and expose the truth in order to get them to be held accountable. Remember Haman trying to kill the Jews until Mordecai learned of the plot and told Queen Esther and she told the King about Haman and ultimately, he was hanged on his own gallows (and his ten sons) that he wanted to kill Mordecai with and then Mordecai got promoted to take over his position. We are to have no part with people who are working in darkness but rather expose them.

11 And have no fellowship with the unfruitful works of darkness, but rather expose them. 12 For it is shameful even to speak of those things which are done by them in secret.