TIME TO PURGE OUR BAD FRIENDS & FIND OUR REMNANT FRIENDS

In times of peril like today – with great confusion, strife and stress – the value of having even just one remnant friend over hundreds of friends who are not close to the Lord is extremely important to helping you keep your peace on and making the right decisions in life.   It is amazing who people turn to when times get rough and their lives are disrupted.  Those who are grounded solidly in the Lord and live a consistent life of peace become valuable and rare diamonds.  Those who are of the world who may appear financially successful yet are not of the Lord are usually not the first people you would turn to for guidance and wisdom.

When a person has true remnant godly friends in their lives who hear from the Lord, have dreams of the Lord, are blessed by the Lord then when conversing with them you will usually pick up additional wisdom from them when looking to make decisions in life.  You will also receive protection and possibly some provision from them whether financially or at least through godly counsel and wisdom.  Conversely if you have more friends who are ungodly, selfish, perverse, evil, into witchcraft, narcissistic / Jezebellic  – then you will end up hurting yourself in the short run and possibly eternally.

I know of many people who are in ministry who are unfortunately not pure, consecrated or godly and those who get to know them get hurt from them.  They are not the real deals and they don’t live lives close to the Lord – they simply want to gain financial benefit from people who believe what they say or feel sorry for them.  It is so hard to discern sometimes as many appear to be sheep when in reality they are wolves.

I have several people close to me who speak into my life and help me pursue my personal destiny in Christ and in ministry.  I value them greatly.  At the same time I have had people in the past who got close to me but turned out not to be as godly as they portrayed.  They had to leave in order for me to not waste my time listening to their advice and taking me off course from my mission to help as many people as possible to get healed from their soul wounds and delivered from demons.  Had I tried to keep a relationship with them – I would have had to compromise the values the Lord wanted in my life and I would have wasted my time and would have hurt the ministry the Lord directed me in.  I know of many people who are used by the demons in their family and friends to pull them away from the Lord and their destiny.  We cannot submit to the demons in our family, spouse, friends or anyone – we must only submit to the Lord.  Often Satan uses our ungodly spouse to speak into our lives to try and stop us from God’s calling in our lives. 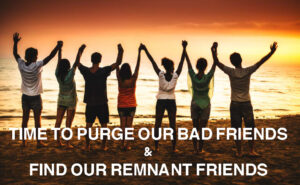 That is why it is so critical that you don’t have any close friends or family in your life who are goats or tares who you listen to.  It is one thing to let them spew their venom on you once or twice a year and an entirely wrong thing to listen to them every week.  I will not let a person who I know is not godly speak to me on any kind of regular basis because it wastes my time and can cause me to get off course of what the Lord is doing.  There are many who are in ministry who are not godly who would try to speak into other’s lives and if you listen to their suggestion just one time and follow their advice then you will be burned.  It’s one thing if you are trying to help others who are hurting to get freed from their past and you keep them at a distance as they are healing and an entirely different thing to bring them close and have them speak into your life to try and direct you.

A friend loves at all times, and a brother is born for adversity.

David had one good friend in Jonathan.  He could trust him with his life.  Jonathan’s dad Saul tried to kill David many times but David knew that Jonathan would do anything to protect him.

Samson confided in Delilah multiple times when clearly she was trying to set him up for capture and his ultimate death – but instead of cutting her off and moving on – he stayed with her until he divulged the secret of his strength and ultimately died.

Job had bad friends and all the advice that they gave him was worthless and just caused him more pain.  They told him he sinned, that he needed to curse God and die. Job had to pray for them and then he was blessed with double for his trouble.

After Job had prayed for his friends, the LORD restored his fortunes and gave him twice as much as he had before.

So if you don’t have a remnant friend – pray for one – that the Lord would connect you to have at least one close friend who was godly.  Then also pray that the friends who would hurt you would be taken out of your life.  The friends who are bad will always have demonic drama in their lives that would try to pull you into it to waste your time, hurt you, cost you money, and take you off course from the Lord.