DELIVERANCE IS NOW RESONATING WITH THE HIGHLY INFLUENTIAL

Over the past few months I have been inundated with an increase of desire from people around the world who are desperately pursuing deliverance.  Historically when people reached out to me I would see many who were hurt deeply from their mother or father, step parents and others as well as from being exposed to sexual things (porn, molested by their siblings, adults, etc.) and were affected significantly enough that it would greatly impact their ability to maintain a high paying job or influential positions as you can imagine.  But lately I have had many who would be considered to be highly educated professionals and influential people from wealthier careers and positions who have become aware of deliverance and the need for it in their own lives.   Entrepreneurs, psychologists, presidents of companies, founders and owners of businesses, judges, law enforcement, political figures, Hollywood actors and actresses, professional athletes, chiropractors, medical doctors, pilots, sales executives and others are now pursuing deliverance for themselves as the message is resonating within them for the desire for true peace in their lives and the lives of their loved ones.  Then after deliverance they are able to make a huge impact on their friends and their families because of the resources and influence they carry.

The message has been simple – you get hurt emotionally, physically or sexually growing up – and then you get reminded of the wounds later in your life from demonic thoughts that you cannot stop.  Some hear 50-60,000 thoughts a day of which 80% are negative and 95% repetitive according to a National Science Foundation study in 2005.  Your soul gets wounded.  Your soul is comprised of your mind (thoughts), will (freewill to choose), and emotions (how you respond).  Then the demons give you thoughts and you do what they say or suggest and make bad decisions that hurt you and your loved ones.  The enemy is the real enemy.  Not your mom or dad, your siblings, your spouse or friends or others.  Demons tell you that you can’t trust anyone because you were not able to trust your mom or dad or others to protect you when you grew up.  So you listen to you’re the thoughts coming to you instead of from the Lord and then you have negative consequences.

There is a saying that hurting people hurt people and it is true.  Until a person gets healed from their past wounds from Jesus and then can completely forgive those who hurt them from their hearts – they will hear thoughts from the enemy and hurt those they are in relationship with.  They will self-sabotage their own relationships.  And now the highly educated are learning the truth and understanding how it all works.  They are going deeper spiritually to looking behind the negative reactions and bad behaviors of people and seeing that these people are only behaving these ways because they are obeying the demons speaking to them and the only true way to fix them is not through medication or behavior modification programs but to get to the spiritual root of their pains.  By going back to the original wounds and having Jesus give them a word of understanding to see from His perspective why their mom or dad or others hurt them and then being able to truly forgive them from their hearts to take away their legal rights and then commanding the demons to go to the pit in Jesus name.  Then they no longer will hear all the negative thoughts and be able to behave normal, loving, humble and peaceful. 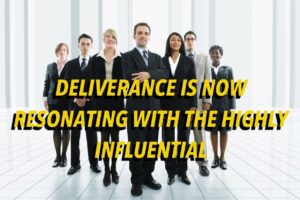 One person I did a session with was a judge and she had read some of my books and stated that they should be required reading for all who attended school and college.  I reflected upon what she said and as I thought through what would happen if a high school or college age individual read the books to understand why their mom or dad or anyone else did not treat them in a loving way which caused them to hear voices of demons and not be able to be freed (even if they attended church their whole life) and then were able to forgive those who hurt them and command the demons to go – then they would be able to help their siblings to get free and perhaps reach their parents with the truth and help them get delivered.  What an amazing change that would happen in our country and world if people were told the whole truth and simply forgave those who hurt them and humbled themselves from their pride and repented for their own sin.  If only the church would teach the whole truth and not be religious and never talk about the need for deliverance which was 1/3 of Jesus’ ministry on earth.

So if we can see many in the highly educated and professional world begin to understand the truth of how this works – what an amazing change that would occur before Christ returns for His pure and spotless bride.  Those who are highly educated and affluent are able to make more of an impact to help others see the truth simply because they have more resources to get the truth out. There are so many in the church who are not the bride of Christ because they have not truly forgiven everyone who has hurt them and are behaving in ways of the flesh.  Galatians 5:16-26 talks about what happens when people don’t get delivered.  They are simply white washed tombs who listen to demons and behave in the flesh.  When they get delivered they hear from the Lord more clearly and thus will behave in the fruit of the spirit.

It is exciting to see the Lord reaching out to the business leaders and seeing them respond.  President Trump was a highly affluent businessman who we have seen transform into making godly decisions that those with demons hate.   He is trying to save the unborn babies from being killed – appointing a godly woman to the Supreme Court in Amy Coney Barrett – which would allow America to overturn Roe V Wade and stop the killing of babies and allow the Lord to bless America instead of being cursed.  I think about myself – as I was a successful businessman in the financial services industry – the top sales rep for the largest banking compliance company in America.  I had no desire to do ministry whatsoever but because of going through some extreme circumstances with some people personally – I could see first-hand how demons worked to cause people to behave horribly.  Then I was able to survive the attacks and overcome them and now can lead others to their freedom from their torment from their demons through forgiveness and repentance and humility.  I am amazed at what the Lord is doing as hundreds of new people every week are becoming aware of Restored to Freedom and the message of truth and it is resonating as more people get delivered every week.

Time is getting shorter before Christ’s return – we need to do everything we can every week to get the word out to the world before it’s too late.  And if those in the church won’t tell us the whole truth – then God will use the highly influential of the business world to do it.  It’s been fun to see how the Lord has started to have me go into the largest Marriott hotels and invite people who live in the largest cities in America through Facebook Ads to come – and they are coming.  If the church refuses to talk about deliverance and help people get healed and freed then God will go outside the church to places where they will allow His spirit to flow.  God says “Let My people go!”