The state of the world right now is confusion, anger, fear, twisted truth, lying, deceit, and sexual perversion amongst others.  It is a mess.  The state of the church is much in the same position as the world as so many have tolerated sin and looked the other way.  Of course Satan will attack those in the church as much as he can in order to cause those who are truly of the Lord to be attacked by his people who are not godly but try to act it and then accuse God’s people of things that are false as all it takes is to get people to believe one lie to get them to believe a person is bad instead of good.  The spirits of Jezebel, Leviathan and Ahab are three higher ranking demons that cause much of this mess.  They are all at work together in the lives of most people in the world to keep the church ineffective, ruin most marriages and cause individual lives to be tormented every day.

When people go to the doctor to try to get healed of a pain they must be honest with where the pain is located, what the symptoms are and how often it affects them.  The same thing goes for people when they want to be delivered from the demons tormenting their minds and bodies. They must be honest with their personal struggles and not deny it or blame it on other people.  The spirits of Jezebel and Leviathan gain legal rights to torment people when they undergo wounding when growing up (often from a parent or step-parent but also through any sexual violation including exposure to pornography, being touched, molested or raped or through any other person who treats them harshly).  Ahab comes in when being raised by a parent who is more quiet and reserved and allows people to run over them, and they tolerate control and manipulation in order to try to keep the peace. So let’s take a look at the specific symptoms of the spirits of Jezebel (1 & 2 Kings and Revelation 2:18-23) , Leviathan (Job 41) and Ahab (1 and 2 Kings): 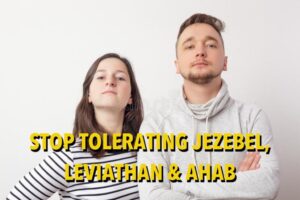 So how do people get healed and delivered from these demons (as well as others)?  They go back to their various wounds / pains and traumas from childhood and ask Jesus to come to speak to them in their minds to give them a word of insight so they can understand why the bad things happened to them when they were growing up so they can truly forgive people who hurt them from their heart and then command the demons who attached to their soul to go to the pit in Jesus name.  Then they can command the top demonic spirits to identify themselves before the courts of heaven so they cannot lie and interrogate them to find out when they gained access to them (usually through a wound / trauma or sexual violation or when they were in the womb or being born and experiencing trauma) and then find out what gives them legal rights to torment them and take it away (through forgiveness, repentance, breaking off generational or witchcraft curses, etc.) and then command them to go.

Too many people have tolerated these spirits in their lives which cause broken relationships, ineffective churches and government and many pains and infirmities in their bodies as the demons in people have ruled over God’s people for too long.  People need to stop allowing those who are operating in demonic spirits to control and manipulate them out of threats, fear, lies, etc.  We need to address the spiritual wounds and pursue healing and deliverance in order to rescue people from their torment and abuse and to increase the number of those who would be considered to be the bride of Christ.  If you allow people with demonic spirits to abuse you verbally, emotionally or worse – then you will not be able to do anything for Christ.  So take a stand and just say no to people who operate out of the spirits of Jezebel, Leviathan and Ahab and do not let their intimidation efforts cause you to bow down to them in fear.