IT’S TIME TO STAND UP TO JEZEBULLIES’ TEMPER TANTRUMS

When a bully demands, yells, curses, riots and threatens to kill you – should you run and hide like Elijah did when Jezebel threatened to kill him after he killed 850 of her Baal prophets or should you stand up against the bully and just say no like David did to Goliath?  It is amazing to see how many people in the world who don’t get their way will act like adult babies throwing temper tantrums to make you do what they want.  That is the way of demons.  People who listen to demons will yell, scream, curse, riot and threaten to kill you in order to make you bow down to them and their demons.  They will threaten to “expose” you in order to get you to do what they want (which really means they will lie about you in order to try and manipulate you to do exactly what they say).  We see this on a personal level between husbands and wives, friends, co-workers, church members and we see this on a national level when it comes to people aligned with organizations that are evil such as Antifa and Black Lives Matters which are controlled by people and organizations with demonic influence coming against godly principles.  George Soros funds these groups and he is doing everything that he can to bring down the United States. 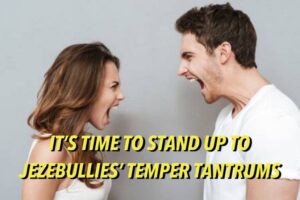 So the choice for people of the Lord are to either allow those with demons to continue to take away their freedom and bow down to serve their evil agendas or to stand up and say “No!” and resist their evil and moving forward with God’s agenda.  So many people in the church have tolerated evil both in those trying to take over leadership and those who they are in relationship with.  They have been taught that we should just get along with everyone and be nice little Christians and give in to those who oppose us.  Unfortunately this has been going on for many years and by allowing those who are Jezebullies to get their way – society has tolerated evil and sin and denigrated the righteousness and holiness of the world.  Jesus came to the world not to tolerate sin and allow His people to be influenced by the ungodly but the other way around.

So what must be done? We need to ask ourselves this very important question.  Are you going to serve the demons in other people or God?  If you choose to give in and tolerate those with demons and be Jezebullied by them then you will never be able to accomplish the greater things that God wants to do through you.  Had I bowed down to my wife and listened to her and her pastor I would never have seen tens of thousands around the world delivered from their demons.  We must rise up and tell those with evil agendas “No!” that we will not allow them to run our lives, ruin our plans, and destroy our country.  We must stand up to spouses who are abusive and evil and tell them if they won’t change and get delivered that they will no longer have the privilege of abusing us as we will not serve their demons anymore.  We must listen to the Lord and not be persuaded by people.  God will hold us accountable for serving the demons in others and not him.  For looking the other way and allowing ungodly behavior and decisions to occur.  Why would anyone approve of killing babies in the womb of a mother – because they were listening to others’ demons yelling, screaming and threatening them and then they got in fear to stand up for what was true and good.  We must walk away from those trying to go off on us for hours and hours, separate from those trying to control us in ungodly ways, remove people from positions of authority when they are operating in the spirit of Jezebel.

The Message to the Church in Thyatira

18 “Write this letter to the angel of the church in Thyatira. This is the message from the Son of God, whose eyes are like flames of fire, whose feet are like polished bronze:

19 “I know all the things you do. I have seen your love, your faith, your service, and your patient endurance. And I can see your constant improvement in all these things.

20 “But I have this complaint against you. You are permitting that woman—that Jezebel who calls herself a prophet—to lead my servants astray. She teaches them to commit sexual sin and to eat food offered to idols. 21 I gave her time to repent, but she does not want to turn away from her immorality.

22 “Therefore, I will throw her on a bed of suffering, and those who commit adultery with her will suffer greatly unless they repent and turn away from her evil deeds. 23 I will strike her children dead. Then all the churches will know that I am the one who searches out the thoughts and intentions of every person. And I will give to each of you whatever you deserve.

So the Lord will judge you for tolerating people who operate in the spirit of Jezebel.  You will be held accountable if you allow men and women who to do ungodly things and then look the other way.  If you allow your spouse to control and manipulate you into tolerating ungodly decisions to be made which will ultimately hurt your own children.  It’s time to fear God more than you do a man or woman.  It’s time for President Trump to stand up against any lawlessness and hold those accountable who participate in acts of rioting and injustice. It’s time for those who behaved in corrupt ways, hurting children, sexual perversity and corruptness to be held accountable.

We will all answer to God for looking the other way and allowing sin to happen instead of standing up and addressing it and holding people accountable.  The enemy is strong and wants to infect the world so when people stand up for Christ they will be used powerfully for the Lord and be hated mightily by the world.  It is worth it all to hear the Lord tell you “Well done my good and faithful servant.”  So be bold, confident and courageous and the Lord will have your back and others will want what you have.  Don’t be intimidated by the Jezebullies anymore.  Stand strong and the Lord will be proud of you. You can do it!