GOD LOVES OUR BOLD FAITH IN THE MIDST OF THE ENEMY

2020 has been a year to show the Lord just how bold your faith really is in the midst of uncertain times that have included a worldwide pandemic, job uncertainty, riots, political confusion, relationships challenges and social media strife.  Unfortunately many people in the church ran and hid – bowing down to the enemy – getting into fear and worry, hiding in their homes, believing masks would keep them safe, being afraid to post their thoughts on social media for fear of people coming against them or getting reprimanded from their employer or church pastor.  It’s been a great year to show what your mettle (a person’s ability to cope well with difficulties or to face a demanding situation in a spirited and resilient way) really is to the Lord.

I think back to what the Lord asked me to do when COVID started shutting down the U.S. in early April.  I was in the middle of my 2020 BREAKTHROUGH tour as I was in Phoenix, AZ and everyone was shutting down and stopping their meetings in churches, etc.  I was supposed to go to Las Vegas, then Anaheim, LA, Ojai, Ventura, Burney, CA, Portland, OR, Seattle, Billings, MT and beyond.  I asked the Lord if He wanted me to continue doing ministry or to shut down like everyone else.  He told me to keep going wherever people would accept me.  I asked him if I should broadcast my meetings on Facebook for the world to see and he said absolutely.  So my adventure began first in Las Vegas where the Strip was almost vacant.  Families were riding bikes and roller blading and skating down the sidewalks.  Everyone was fully clothed appropriately.

Then I went to Anaheim where we had 30 people who attended (at the time California’s governor Newsome only wanted 10 people to meet).  Many got delivered and saw physical healings.  Then I went to LA, Huntington Beach, Ojai, Ventura and up to Burney, CA and no meetings were cancelled.  Then onto Portland, OR and Seattle, WA for a 3-day 5 meeting conference over Mother’s Day weekend where one woman flew in from Washington, DC. Then onto Billings, MT and Gillette, WY and then Colorado Springs.  Then many churches were shutting down and the Lord said to go to Minneapolis shortly after the riots erupted and to hold a meeting in a Marriott hotel.  I did on just 8 days noticed and ran an ad on Facebook and saw 30 people show up of which 90% never heard of me and came because the Holy Spirit spoke to them when they saw the ad. I continued to go to Marriott hotels in Des Moines, IA, Omaha, NE, Minneapolis, MN, Rapid City, SD, Moorhead, MN, Richmond, VA, Orlando, FL, Atlanta, GA, Houston, TX, Dallas, TX, Oklahoma City, OK, Wichita, KS, Kansas City, KS, St. Louis, MO and Chicago, IL and then onto Phoenix, AZ, San Diego and LA.  Other meetings in Hilton Head Island, SC, Holiday, FL, Port Richey, FL, Ohio, Indiana, Jacksonville, FL,  Birmingham, Merkel, TX, Cisco, TX, etc. 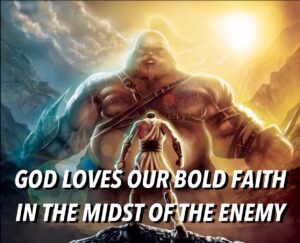 For the year of 2020 the Lord has had me do 70 meetings in 50 cities which was the most I have done so far in my 5 years of ministry.  It took faith to do these during a pandemic and if I had gotten into fear from any state governors threatening or limited myself to doing ministry in just churches then I would not have seen but maybe 20 meetings all year.  Thousands of people were healed from their painful soul wounds of their past and many received physical healings.

God is calling all of those who are a part of His body of Christ to stand up for him and not fall for the enemy. Think of all the great ones in the Bible.

Stephen stood up for Christ and ultimately cost him his life.  Daniel stood up for him and did not get eaten by the lions and his enemies were ultimately thrown into the lion’s den and killed.   David had bold faith to even consider fighting Goliath with just 5 stones and a slingshot yet the Lord blessed him in victory.  Abraham had great faith to move away from his family to a land he had never been to so that he would be blessed.

16 So then, because you are lukewarm, and neither cold nor hot, I will vomit you out of My mouth.

God wants bold faith.  It is impossible to please God without faith.

By Faith We Understand

11 Now faith is the substance of things hoped for, the evidence of things not seen. 2 For by it the elders obtained a good testimony.

Faith at the Dawn of History

4 By faith Abel offered to God a more excellent sacrifice than Cain, through which he obtained witness that he was righteous, God testifying of his gifts; and through it he being dead still speaks.

5 By faith Enoch was taken away so that he did not see death, “and was not found, because God had taken him”; for before he was taken he had this testimony, that he pleased God. 6 But without faith it is impossible to please Him, for he who comes to God must believe that He is, and that He is a rewarder of those who diligently seek Him.

7 By faith Noah, being divinely warned of things not yet seen, moved with godly fear, prepared an ark for the saving of his household, by which he condemned the world and became heir of the righteousness which is according to faith.

11 By faith Sarah herself also received strength to conceive seed, and she[d] bore a child when she was past the age, because she judged Him faithful who had promised. 12 Therefore from one man, and him as good as dead, were born as many as the stars of the sky in multitude—innumerable as the sand which is by the seashore.

13 These all died in faith, not having received the promises, but having seen them afar off [e]were assured of them, embraced them and confessed that they were strangers and pilgrims on the earth. 14 For those who say such things declare plainly that they seek a homeland. 15 And truly if they had called to mind that country from which they had come out, they would have had opportunity to return. 16 But now they desire a better, that is, a heavenly country. Therefore God is not ashamed to be called their God, for He has prepared a city for them.

The Faith of the Patriarchs

17 By faith Abraham, when he was tested, offered up Isaac, and he who had received the promises offered up his only begotten son, 18 of whom it was said, “In Isaac your seed shall be called,” 19 concluding that God was able to raise him up, even from the dead, from which he also received him in a figurative sense.

21 By faith Jacob, when he was dying, blessed each of the sons of Joseph, and worshiped, leaning on the top of his staff.

22 By faith Joseph, when he was dying, made mention of the departure of the children of Israel, and gave instructions concerning his bones.

The Faith of Moses

23 By faith Moses, when he was born, was hidden three months by his parents, because they saw he was a beautiful child; and they were not afraid of the king’s command.

24 By faith Moses, when he became of age, refused to be called the son of Pharaoh’s daughter, 25 choosing rather to suffer affliction with the people of God than to enjoy the passing pleasures of sin, 26 esteeming the reproach of Christ greater riches than the treasures in Egypt; for he looked to the reward.

27 By faith he forsook Egypt, not fearing the wrath of the king; for he endured as seeing Him who is invisible. 28 By faith he kept the Passover and the sprinkling of blood, lest he who destroyed the firstborn should touch them.

29 By faith they passed through the Red Sea as by dry land, whereas the Egyptians, attempting to do so, were drowned.

By Faith They Overcame

30 By faith the walls of Jericho fell down after they were encircled for seven days. 31 By faith the harlot Rahab did not perish with those who did not believe, when she had received the spies with peace.

32 And what more shall I say? For the time would fail me to tell of Gideon and Barak and Samson and Jephthah, also of David and Samuel and the prophets: 33 who through faith subdued kingdoms, worked righteousness, obtained promises, stopped the mouths of lions, 34 quenched the violence of fire, escaped the edge of the sword, out of weakness were made strong, became valiant in battle, turned to fight the armies of the aliens. 35 Women received their dead raised to life again.

Others were tortured, not accepting deliverance, that they might obtain a better resurrection. 36 Still others had trial of mockings and scourgings, yes, and of chains and imprisonment. 37 They were stoned, they were sawn in two, were tempted, were slain with the sword. They wandered about in sheepskins and goatskins, being destitute, afflicted, tormented— 38 of whom the world was not worthy. They wandered in deserts and mountains, in dens and caves of the earth.

39 And all these, having obtained a good testimony through faith, did not receive the promise, 40 God having provided something better for us, that they should not be made perfect apart from us.

So don’t be a wimp and cower in fear when the enemy speaks out against you for your stand for Christ.   Stand up in the face of the enemy when he is yelling at you and just say no. Do not be pushed around and bow down in fear.  Be bold – speak the truth !!  God loves it and will bless you when you take a stand for him.  Now is the time – if not now then when?  I get it – I used to be a wimp spiritually – but realized that someday I would have to face the Lord and I wanted to hear Him say “Well done, my good and faithful servant” and not “Depart from me I never knew you!”  Repent for your fear and tolerating the evil in this world.  Some of you need to stop tolerating intimidation and abuse from your father or mother, wife or husband, siblings, employers, boss, pastor, deacons, government officials. Do not tolerate the Jezebel spirit in others trying to intimidate or manipulate you to compromise your walk and calling in Christ. Ask the Lord to help you walk in full confidence and boldness of your faith. Put God first in all things.  Love your wife and husband and children.  Pursue getting yourself healed and delivered from the demons that are trying to stop you from doing what God called you to do in your life.