HOW MANY LIES ARE YOU BELIEVING TO BE TRUE?

It is truly amazing when you think about how many lies we believe to be true every day about situations and people.  We believe lies about people because we have been told information about people from people who have anger and hatred toward certain people that they can no longer control so they make things up to make other people to believe lies that are not truth to turn them away from their victims.

I remember a woman in ministry told me once that she had a dream about me doing ministry with her in New Orleans.  This woman (Woman A) had a large following on Facebook in a group.  Another lady (Woman B) who had a similar ministry to hers was called a “Jezebel” and initially caused me to believe what she said about Woman B was true.  Later I observed that Woman A seemed very angry and wanted to “expose” many other people who had ministry to “take them down.”  I learned that Woman A lied about Woman B as Woman B was a very reputable person and had a ministry with great fruit.  Then later after I had to pull away from Woman A  due to her aggressive behavior and dominating tendencies – Woman A then threatened me.  I ultimately had to confront Woman A about some truth that I learned about her and she backed down and said nothing.

The Lord showed me that everyone is believing lies about various people.  That those with the spirit of Jezebel who have unhealed soul wounds will frequently lie to people who are their targeted victims to get other people to believe that they are bad people instead of learning the truth about those who have the spirit of Jezebel. 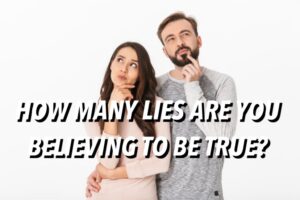 People with the spirit of Jezebel will often gossip lies to as many people who will listen to them in order to make people believe bad things about good people.  That is how Satan works in them.

Throughout our lives we often believe lies that are told to us as truth about our spouse, siblings, parents, children, people at church, in ministries, work environments, school, wherever there are people.  It is really sad but people who have not had their soul wounds healed will hear demons that will cause them to behave in negative ways and speak words and take actions that are ungodly intended to hurt godly people.  I know of several people in ministries who have simply lied about other people who they believe are bad but the people are actually good and the people who have lied about the good people are the ones who actually are bad.

We can believe lies about people and then take action against them to hurt them deeply – even to the point of death.

In the Bible many who have believed lies took action to murder innocent godly people.

King Ahab wanted Naboth’s vineyard but after approaching Naboth to purchase the vineyard or giving him another property in exchange that was equal value Naboth said no. Then Ahab’s wife decided to do what needed to be done to take Naboth’s vineyard by lying about him and then killing him.

Proclaim a fast, and seat Naboth [a]with high honor among the people; 10 and seat two men, scoundrels, before him to bear witness against him, saying, “You have blasphemed God and the king.” Then take him out, and stone him, that he may die.

Jesus was also lied about by Pharisees and scribes who were jealous of him and then they lied about Him to get the leaders of the land to kill him.

So how can you clear up a lot of the lies that you are believing – one option is to actually go to the person and ask them for the truth.  Keep in mind that it doesn’t mean that they will actually tell you the truth depending on what type of person they are. When a person has a history of being honest and forthright and good fruit in their lives – then you can trust what they tell you.  Conversely when a person has a history of lying and bad fruit – then you can usually not trust what they will say (until they are healed and delivered).  Discernment is also key – when you can hear the Holy Spirit consistently – and are healed and delivered of your past wounds – then you will hear more from the Lord and Holy Spirit and less from the enemy and his lies.

So the next time you hear something about someone that is negative – check with the Lord and Holy Spirit and see what you hear.  Don’t believe everything that you hear.