JESUS CAME TO DIVIDE & NOT UNITE

Most people want to “get along” with everyone in the world but unfortunately most people in the world (including many who attend church) are aligned with Satan and his demons and doing his work and not the work of Jesus Christ. So if you want to get along with the ungodly you need to tolerate living an ungodly lifestyle like they do and compromising living a life for Christ, which many do. So many people in the world participate in ungodly world practices like celebrating Halloween (Satan’s holiday), yoga, and tolerating sin like homosexuality, abortion, sexual immorality, financial corruption, encouraging division between races, etc.

The current election is so polarizing between good and evil and a great example of how you cannot tolerate evil nor “get along” with others who do. What is truly amazing to me is when people who would call themselves Christian would actually support the pure evilness of the Democratic Party and Joe Biden. When there are numerous videos of Biden touching young girls inappropriately, smelling their hair, and other perverse behavior, betraying America by taking money from China, the Ukraine and other countries and when recently his son Hunter’s laptop was discovered showing videos of him raping Chinese children and other financial corruption. Anyone who could support such an evil and wicked person is not a Christ follower whatsoever as they are following a person who is living for Satan.  Yes, the media and Democratic party portrays President Trump in as negative a light as possible but when you look at Trump’s actions to stand up for innocent babies lives, arrest those who are sexually trafficking children, encouraging churches to meet, putting up walls to keep out people with evil intentions from crossing illegally into America, exposing the lies about COVID and treating good people with respect and talking about godly & American values, there is no comparison. Biden couldn’t be more evil and Trump couldn’t be doing more good for America. 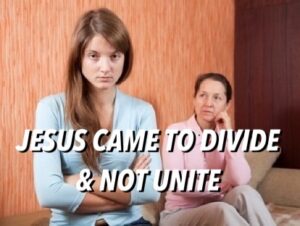 So the lightning rod of those who would be so blinded and support evil is hard to imagine. True Christians who choose to consecrate their lives to righteousness and godliness are not able to get along with people who tolerate sin, ungodliness, impurity and corruption. Thus there will be friction, arguments and strife if a real Christian engages with a fake one because they do not have the same godly spirit inside them. We are not to tolerate those who choose to force Christians to obey their ungodly ways. We are not to compromise our godly values and allow sin into our lives and it doesn’t matter who the person is – our father, mother, children or spouse. We must not choose to submit to the demons in other people in order to get along with them. We cannot unite with Satan’s people. We must divide ourselves from them and come away from them and pray that the scales from their eyes are lifted to seeing the truth and desire the peace that a true Christian can have. We must make them jealous in a healthy way to want what we have so that they repent for their ungodly ways.

When you take a stand for Jesus you cannot tolerate Satan. I remember when a pastor from a church I used to attend back in 2015 demanded that I meet with him and his son-in-law as they wanted to confront me in front of my new pastor. I asked the Lord for some insight on the meeting. I told God that I just wanted to get along with them and asked God if that was my goal for the meeting. God asked me “Was it Elijah’s goal to get along with Jezebel? I said no.” Then God asked me “Was it Jesus’ goal to get along with Satan!  I said no.” So God told me that was not my goal for the meeting. God wanted me to confront them for the sin that they were in. God had given me a dream the night before in which the pastor’s church only had 20 people in it and I didn’t recognize many people who attended except the pastor and his son-in-law and when I woke up the Lord asked me to guess what day of the week that the service took place on. I guessed a Wednesday because only 20 people were there as they normally had 200 people who attended as their church was growing rapidly. God told me the service took place on a Sunday as He was going to shut them down due to the sin they were in.

So at our “showdown” in front of my pastor at his church I confronted them for the sin that they were in. They refused to repent and God told me that it was finished and He would shut them down. Ten months later after they began having people leave their church they were down to just 20 people who attended just like my dream showed and then they had to sell it to the Humane society. The Lord said “Just like Jezebel was eaten by the dogs – I sold their church to the dogs. Let that be a lesson as I will do the same things to other people who operate in the Jezebel spirit and tolerate evil.”

So you cannot “get along” with people who do not have pure and godly motives in their hearts. It means as a Christian that these people will not be a part of your inner circle.  Even though they may call themselves Christians – you need to come apart and away from having a close relationship with them so that you do not get infected by their ungodly spirits.  You can love them from afar and pray that their eyes are open to seeing the truth.  But if you listen to them and come under their demonic spirits you will allow sin to infect you and compromise living a godly and pure lifestyle and then suffer consequences.  Satan has many people who would call themselves Christian whose assignments are to cause you to tolerate their ungodly lives and infiltrate your life and get you to sin and pull you away from Jesus.  Just say no.  Often times you will need another person in your life who is strong to help you stand up to the demonic spirits in others.  Many abusive husbands or wives know exactly what to say to manipulate you into staying and submitting to the demons in them instead of standing up against them and for Christ.  It is not easy but is necessary in order to serve Christ.  Do not serve the demons in anyone – choose Christ and be blessed.