THE SPIRIT OF OFFENSE IS OUT OF CONTROL

The enemy has been causing people to take an offense at an unusually high rate both in the world and in the church during the past month.  When people are not healed from their past wounds and delivered they hear thousands of demonic voices in their heads every day which tell them to be offended so they can make people feel guilty so they can control them and get their own way.  The enemy causes them to get hurt easily over the smallest things and then everyone who doesn’t do what they want has to walk on eggshells around them in order to have a relationship with them.  It creates strife, anger and fear, and ruins all intimacy, love, joy, peace and the other fruits of the spirit.  Being offended is ungodly and selfish and causes people to be mean and strive about everything.

So many people will just look for things to get offended over so they can complain, strive, argue, demand, and make you do what they want.  They ultimately want to control you and make you bow down to them spiritually.   I see it in my own Facebook support group as people who have not been healed in their souls will take an offense if you don’t like everything they post or if you question them in a loving way.  I see it when I am doing ministry around the country if I don’t talk to them because I have others that are already talking to me.  The spirit of offense is demonic in every way and people who get offended need to repent to God for it and apologize to those that they took offense from.  The truth is that people who have been healed from their past soul wounds and delivered from the demons tormenting their minds will not take an offense over anything.  Those who take offenses easily need deliverance.

People with demons will offend people all day long and take an offense at the drop of a hat.  We are to forgive people no matter what they do in order for us to stay cleansed in our souls and freed from demonic attacks in our thoughts.  If a person does something wrong to you and does not repent for it then they are the ones who will have consequences with God.  It is up to you to forgive them. 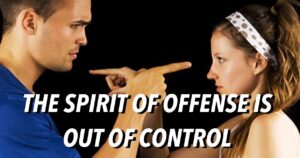 17 Then He said to the disciples, “It is impossible that no offenses should come, but woe to him through whom they do come! 2 It would be better for him if a millstone were hung around his neck, and he were thrown into the sea, than that he should offend one of these little ones. 3 Take heed to yourselves. If your brother sins against you, rebuke him; and if he repents, forgive him. 4 And if he sins against you seven times in a day, and seven times in a day returns to you, saying, ‘I repent,’ you shall forgive him.”

When I was delivered by the Lord in September 2008 I felt so different inside as I felt like an entirely different man who was filled with the fruit of the spirit.  I have never lost my temper since nor cursed. I can see people in the spirit and know the only reason why people don’t behave with love, joy, peace, patience, faithfulness, kindness, goodness, gentleness and self-control is because they have been hurt in their past and hear a lot of demonic thoughts.  I can see people like Christ so I have a compassion for them because most can’t help but behave in ungodly ways due to the thousands of demonic thoughts they get every day.  There are so many in the church who take an offense at everything and there is nothing you can do to make them change but try to limit your interactions with them in order to have peace.

The enemy loves it when people take offenses because they are on the enemy’s ground and he has legal rights to torment them and those they get offended at.  Neither party will experience peace.

9 Love prospers when a fault is forgiven, but dwelling on it separates close friends.

10 A single rebuke does more for a person of understanding than a hundred lashes on the back of a fool.

11 Evil people are eager for rebellion, but they will be severely punished.

12 It is safer to meet a bear robbed of her cubs than to confront a fool caught in foolishness.

13 If you repay good with evil, evil will never leave your house.

14 Starting a quarrel is like opening a floodgate, so stop before a dispute breaks out.

15 Acquitting the guilty and condemning the innocent— both are detestable to the Lord.

16 It is senseless to pay to educate a fool, since he has no heart for learning.

17 A friend is always loyal, and a brother is born to help in time of need.

18 It’s poor judgment to guarantee another person’s debt or put up security for a friend.

19 Anyone who loves to quarrel loves sin; anyone who trusts in high walls invites disaster.

More often than not the people who are offended are in the wrong and need to apologize to those they took the offense against.  I see so many people who struggle with the spirit of Jezebel who actually offend people all day long yet take offenses over nothing.  The problem with them is that they were hurt growing up and have heard demonic thoughts ever since because they never truly forgave in their hearts those who hurt them. Then the demons tell them to take offenses from other people and get mad and let them know how they feel.  So they never truly can let anything go and their demons will compound as they will take more offenses with other people and hear more voices from the enemy.  Ultimately as they get older they have less and less close friends because they have taken an offense from everyone who does not do exactly what they want and blame others for their own issues.  When you take an offense you are the one that is off and you put up a fence around you.

To get freed once and for all we need to get our past soul wounds healed by Jesus by asking Him for insight on why people hurt us in our past so we can forgive everyone from our hearts who hurt us and then command the demons who had legal rights to torment our thoughts to go to the pit in Jesus name.  Then you will be unoffendable and never take any offenses again.