When I asked the Lord what He wanted me to write about today I heard something I had never heard before. He said He wanted me to talk about “Breaking free from spousal idolatry & slavery.”  I knew exactly what He meant.  There are millions around the world who have been demanding that their spouses submit to them in most everything in their lives.  They tell their spouse what to do, what to listen to, what to watch, what to read, what to eat, what to wear, how to wear their hair, which friends that they can or can’t have, what church to attend, where to work, where to live and to give them sex as much as they want it in any perverted way that they want it, and tell their spouse that they hear from God and their spouses don’t so they need to do everything that they tell them.  This is spousal idolatry and slavery and is sin.

Unfortunately this describes more marriages than you would ever believe as many abused spouses (both male and female) are being brainwashed and intimidated by their ungodly abuser to keep their abuse quiet and hidden so they can continue to control and abuse them more.  Some are more subtle in their control and some are more extreme.   People who do the controlling and manipulation hear demonic voices in their thoughts that puff them up and tell them to make their spouses bow down to them like idols through constant verbal and emotional abuse that no matter how subtle is designed to manipulate their spouses into obeying their authority instead of God.  They will convince their abused spouses to listen to them as they have their best interests at heart when all the time they are trying to pull them away from healthy people and isolate them to break their free wills and cause them to want to give up on their own dreams and life to serve their controlling demonic spouse like a slave.  They are extremely jealous and will try to destroy the self-confidence in their victims to the point where they don’t even want to live anymore.  They will usually feel the effects of the control and manipulation in their bodies as they will feel sick to their stomachs and can develop into gastrointestinal issues, heart pains, depression, even cancer, suicidal thoughts and death. 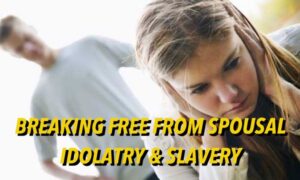 The demonic spirits that are at work are ultimately Jezebel (1 and 2 Kings) and Leviathan (Job 41).  They work in tandem to stop people from being able to do anything for God or limit them in extreme ways so that they are not effective and cannot come into their true callings and anointings in Christ.  They are master manipulators in their words and will try and seduce their victims to believe that they have their best interests at heart and need to listen to their words of wisdom.  They want them to bow down to them, worship them and do everything that they demand.  This is called spousal idolatry and slavery and many who marry experience this and need help to survive.  You have one person who is the taker (Jezebel) and the other is the giver (Ahab).  People operate in the Jezebel spirit when they are hurt by their mom or dad or others emotionally, physically or sexually when they were younger.  The goal of Jezebel in the Bible was to kill the prophets and shut down anything of God and to worship Baal and kill babies.

What should the victim spouse do?  Most have been convinced by their controlling spouse that they are worthless, ugly, incompetent, stupid, unloved, in order to break down every bit of confidence that they could have so they will rely totally upon their abuser for everything.  The victims need to rise up and stand up to their abusers.  They often need someone who can come along side of them to help them stand up for themselves to give them confidence.  They need to realize that if they allow and tolerate their abuser to continue to control them that they are serving the demonic spirits in their abuser instead of God.  They have to choose to serve God.  They need to lovingly let their abusive spouse know that they need delivered from their own demons that they inevitably obtained when they grew up from soul wounds from their own parents, step parents, and others who hurt them, sexual violations (including porn), etc.  They need to give them a chance to see the truth and forgive others who hurt them, humble themselves and repent before God and get delivered from the demons tormenting their thoughts.  If they choose to not change and keep their demons then the Lord will confirm when it’s time to separate so the victim spouse can live and not die.  During the separation the goal is to have the abuser pursue deliverance from their Jezebel / Leviathan spirits and get their past soul wounds healed by Jesus so they can truly forgive those who hurt them from their hearts, and to humble themselves from their pride.  The abused spouse also needs deliverance from the Ahab spirit and to be restored to a normal level of being loved instead of hated and abused.  If during the separation the abuser gets delivered then slowly they can come back together to enjoy a more healthy relationship which will give testimony to what God can do when we are honest, forgive, humble ourselves and repent.  If, however, the abusive and prideful spouse refuses to own their own issues, then the Lord will confirm when it’s time to move forward to a permanent separation of divorce so that they the abused spouse can heal completely and be restored to Christ and ultimately do their calling for the Lord which often times is to help other abuse victims to be rescued, recover and restored.

People who are in the church who are abusive will call themselves a Christian and a believer.  They could even pray in tongues and prophesy. But when their usual day to day life consists of control, anger, jealousy, lying, pride, envy, dissension, sexual perversion, etc. then they are not truly a believer according to the Bible as it states that those who practice such things will not inherit the kingdom of God.  God looks at their fruit and their heart and mind.

Thus we are to give our abusive spouses time to repent but if they refuse and only want to stop you from doing anything for God then it’s time to decide who you will choose to serve.  The demons in your spouse or God.

You will never have peace in your life if you choose to be yoked to a person whose goal is to stop you from having peace, stop you from doing anything for God, and ultimately abusing you every day so that you do not even want to live anymore as they want you to bow down to them and serve them like a slave and idol.   When you choose to serve and live for Christ the enemy’s goal is to stop you.  You have to decide who you will choose to serve.

49 “I came to send fire on the earth, and how I wish it were already kindled! 50 But I have a baptism to be baptized with, and how distressed I am till it is accomplished! 51 Do you suppose that I came to give peace on earth? I tell you, not at all, but rather division. 52 For from now on five in one house will be divided: three against two, and two against three. 53 Father will be divided against son and son against father, mother against daughter and daughter against mother, mother-in-law against her daughter-in-law and daughter-in-law against her mother-in-law.”