When I grew up I went to the doctor when I was sick and the chiropractor when I had back pain and headaches (as I was diagnosed with scoliosis).  I was never taught about how we could walk in the full authority of Christ to be able to see the same works that He did and experience good health like He did.

So when I became an adult I experienced catching pneumonia when I was attending a missions program’s annual conference in Orange County, CA.  I played golf and tennis outside and began to cough up blood the last day I was there and then flew home on a plane and got weaker and weaker and weaker.  By the time I landed in Indianapolis I was very weak and the next morning could not go to work as I felt so exhausted and could barely breathe.  I went to my doctor and he said my lungs were 75% filled with liquid and had I waited to come in until the next day I would have died.  He gave me very large penicillin pills and after a week I became stronger.  He told me that I would catch bronchitis and pneumonia very easily for the rest of my life.  I believed him because I never was taught that the Lord wanted us to walk in good health all the time and I never knew how to walk in the health of the Lord. 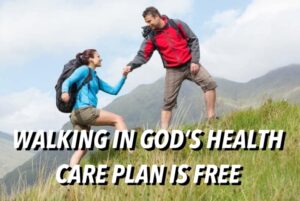 In 2009 I was taught by my mentor about walking in the Believers Authority (a book written by Kenneth Hagin).  How we could do the same things Jesus did like He said in John 14:12-14.

12 “Most assuredly, I say to you, he who believes in Me, the works that I do he will do also; and greater works than these he will do, because I go to My Father. 13 And whatever you ask in My name, that I will do, that the Father may be glorified in the Son. 14 If you ask anything in My name, I will do it.

When I began to learn about this it was a major revelation to me in my spirit.  I wanted to walk in it.  So the enemy began to test me to see if I really would believe in it or not.  I got a toothache one night and initially it was a pain level of a 3 on a scale of 1-10.  By 2 am it was a 10 – and I wanted to go to the ER since my dentist was asleep but God told me that they could not help me and I just needed to take His authority over it.  So with all my faith I commanded the pain to go by declaring “ I command the spirit of infirmity to go in the name of Jesus!” and instantly the pain left.  I could not believe it.  It was simply gone.  I shook my mouth to see if I could make the pain come back but it never did.  The Lord said that is how Jesus did it – He spoke with authority and demons and sickness had to go.  I was so excited to see my first healing miracle.

Then I had a disc in my back that popped out when I picked up a dog awkwardly over a gate.  Immediately I heard the enemy speak to me telling me that backs don’t get healed, your back will have pain the rest of your life, and you will spend thousands of dollars and never get healed.  So the next day my back hurt worse than ever before in my life. I began to speak healing over my back and even got up out of bed in extreme pain and began to walk around my bed stating “my back is healed” and “I feel great” which I most certainly did not.  I was in more pain than ever.  I refused to taint what God could do by taking any Tylenol or pain killers for it. I continued to thank the Lord that I was healed and by the end of the day I felt about 40% better.  That increased my level of faith greatly to believe that God would heal me completely as my faith believed totally that He would.  So the next day I continued to thank the Lord that I was healed and by the end of that day I was 80% healed.  Then by the next morning I was 100% healed and ran 3 miles outside and was so excited that I didn’t have to pay a doctor or chiropractor anything.

Then my next test from the enemy was a bulge the size of a golf ball in my back.  It was painful and after a few days I commanded it to go but it did not shrink.  So I just thanked the Lord it was gone.  A week passed and it was still there.  Then 2 weeks.  3 weeks.  It was painful and annoying.  The enemy tried to tell me it was cancer or a tumor or cyst but I would not let him speak more than 3 words to me.  4 weeks passed and it was still there.  Then 5 weeks.  6 weeks.  It was a battle in the spirit as I had to shut the enemy down as soon as I discerned that he was trying to whisper to me to get me in fear so I would go to the doctor and abandon my faith.  I refused.  Then my wife at the time began to have blurriness in her vision and suggested that she may need to go to the doctor.  I asked the Lord what was happening and He said it was just an attack from the enemy and told me to tell my wife to pray for me with my bulge in my back because she would have something similar come on to her body and she needed to increase her faith to believe for God to heal her and that I would pray for her and we would both be healed.

So I showed her my bulge in my spine and she could not believe how big it was (golf ball sized) and suggested I needed to go to the doctor and I said no – just pray for it. So she prayed for me and I prayed for her.  Immediately her vision became clear.  But my back bulge did not shrink.  A day passed and still no results.  I kept thanking the Lord I was healed.  Finally 2 days had passed and it shrunk about 10%.  3 days and it was down about 50% and 4 days it was gone.  I thanked the Lord for healing me.

God told me too many people give up too soon on their healings and often their lack of faith stops Him from being able to heal them.  They get into fear and then the enemy has them.  Then they run to their doctor and must pay the price for the doctor to see if they can get them healed.  God also said that many are not healthy because of bitterness for those who hurt them and refusing to forgive.  Billy Graham said that 75% of the people would not be in the hospital if they would just forgive. Also if they have strong pride then that will block them from getting healed (remember Naaman had leprosy and wanted healed so he went to see Elisha and was told to dip 7 times in the dirty Jordan river and he refused initially before humbling himself to going and then he saw his healing).  Some people get sick because they are in toxic demon controlled relationships where they are spoken emotionally painful words over them and are controlled and manipulated and hurt over and over again. Also some people are cursed by witches who are both inside the church and outside the church if they won’t do what they want.  They often give people points of contacts like jewelry, clothing, books, artwork that has been cursed and allows them to curse them.

So it is so important that we forgive, walk in humility, break off generational curses and witchcraft, stay away from people who would speak harshly and abusive to us as well as learn our authority in Christ.  I have literally spent nothing on health care insurance since 2012 and have been healed of everything since 2009.  I have not taken any meds, OTC drugs, Tylenol, Ibuprofen or aspirin or vitamins or supplements since 2009.  During the COVID crisis I didn’t worry for one second that I would ever get the illness as I continued to do ministry around the US without stopping or wearing a mask. By learning this and walking in it every day I have been able to spend my money on other things that bring more joy, fun & fulfillment in my life.  Walking in God’s health care plan is free for everyone but requires that you invest some of your time in learning how to appropriate it and then continue to walk it out the rest of your lives.