THE IMPORTANCE OF LIVING A LIFE OF MEEKNESS – NOT WEAKNESS

Today’s world tells us that we need to be bold, loud and aggressive and to demand our own way to make people give us what we want.  That the weak will not survive and to get what you need you have to yell and throw tantrums to get people to fear you and bow down to your every request.  To manipulate others to give you everything you want.  To seduce them to getting them to give you what you desire.  I see it in the church where people try to put guilt trips on those who have mercy hearts in order to get them to serve or give money.

A spiritually meek person is not selfish or concerned with getting their own ways, ideas and desires. They are willing to put themselves in second place or last place and submit themselves to do God’s will and help others achieve what is best for them.  They would rather help another person or group of people to succeed and lay their own life desires down for them.  They do not need any spotlight or attention from thousands on social media to tell them how great they are or how beautiful they look or how handsome or strong they are.  They do not need to post many selfies every week nor let anyone know how many they prayed for who were healed and how many lives were changed by them.  They do not need any adoration from their fans. They consider themselves more lowly than others and do not need to be called by a pride filled title. They are humble and not proud and the Lord loves their sincere and grateful hearts.

Who do you know in the Bible who would be considered meek? 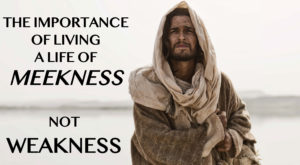 Dissension of Aaron and Miriam

12 Then Miriam and Aaron spoke against Moses because of the Ethiopian woman whom he had married; for he had married an Ethiopian woman. 2 So they said, “Has the Lord indeed spoken only through Moses? Has He not spoken through us also?” And the Lord heard it. 3 (Now the man Moses was very humble (meek), more than all men who were on the face of the earth.)

4 Suddenly the Lord said to Moses, Aaron, and Miriam, “Come out, you three, to the tabernacle of meeting!” So the three came out. 5 Then the Lord came down in the pillar of cloud and stood in the door of the tabernacle, and called Aaron and Miriam. And they both went forward. 6 Then He said,

“Hear now My words: If there is a prophet among you, I, the Lord, make Myself known to him in a vision; I speak to him in a dream. 7 Not so with My servant Moses; He is faithful in all My house. 8 I speak with him face to face, Even plainly, and not in dark sayings; And he sees the form of the Lord. Why then were you not afraid To speak against My servant Moses?”

9 So the anger of the Lord was aroused against them, and He departed.

Why was Moses considered the meekest (most humble) man on earth?  Let’s think about where he came from.  He was brought up and educated by Pharaoh’s family and teachers and was treated to a lifestyle of the very best that money could buy.  Upon learning that he was really a Hebrew he chose to leave the great life that he had for the Hebrews.  He stood up for a fellow Hebrew who was being treated harshly by an Egyptian and killed him.  Then he escaped into the wilderness for 40 years where He found God and began to change into the leader that the Lord wanted to groom to lead about 2 million people to their freedom from over 200 years of bondage and slavery.  It would have been a much easier life for Moses if he would have chosen to stay living a life as an Egyptian.  He could have allowed his fellow Hebrews to be beaten and abused and looked the other way but something in his soul rose up inside of him to defend and protect.  Then he became a shepherd over sheep – a very humbling position from where he came from.  So he went from the luxurious comforts of Egypt to the hot desert and wilderness of Midian.

As the months turned into years in the wilderness, Moses came to the conclusion that he was not going to be great like his parents told him. His parents therefore must have been wrong. As time passed, Moses became content and accepted his lot in life as a humble shepherd (Exodus 2:21).

Moses learned a lot during those 40 years (1/3 of his life). He learned to be gentle and caring. He learned how to herd sheep, and then God could eventually use him to herd people. But more importantly, Moses learned that all his knowledge and abilities had not gotten him wealth and greatness.

Rather, trusting in himself only brought trouble and heartache.

12 There is a way that seems right to a man, But its end is the way of death.

God had used his circumstances—brought about by Moses’ choices—to humble him and teach valuable lessons during those 40 years. Yes, Moses learned that true greatness comes only from God.

6 So he answered and said to me:

“This is the word of the Lord to Zerubbabel: ‘Not by might nor by power, but by My Spirit,’ Says the Lord of hosts.

Then he obeyed God and went back to Egypt in order to rescue the Hebrew people.  He had to battle the Pharaoh (and God’s hardening of Pharaoh’s heart over and over again) and finally lead them out of Egypt through the Red Sea into the desert.  Then he had to put up with many complaints from 2 million people who blamed him for accommodations that were less than ideal.  Many times he stood up for them to God who wanted to kill them all for complaining and start over with Moses.

Because of Moses’ humility, God was able to use him powerfully. God used Moses to write the first five books of the Old Testament. God used Moses as a prophet and as a type of Christ.

Knowing all of this should humble us, as it humbled Moses. Like Moses, when the humility is there, God can do powerful things through us—both individually and collectively.

As Peter said in 1 Peter 5:6, “Therefore humble yourselves under the mighty hand of God, that He may exalt you in due time.” Moses was a shining example of humility. Let’s follow in his footsteps so that God—the “High and Lofty One who inhabits eternity, whose name is Holy” (Isaiah 57:15)—can exalt us as well.

I think about when the Lord spoke to me in June of 2007 as I was facing a divorce that I did not want and asked me what I wanted out of my life.  I told him I thought it was money because I thought if I had millions of dollars I would not have problems.  But I definitely had problems that I could not fix – so I told him I wanted peace.  He told me that He would give me peace but would need to take away all my money first so I could totally trust Him to provide my needs.  Then He would change my heart to His and then He could use me for great things for Him.  He later said He would use me in a worldwide ministry to help tens of thousands into freedom from bondage and torment from the enemy.  Then He would bring back more money than before but I would use it for His purpose and not my own personal selfish desires.

Think about President Trump.  Most would not consider him to be a meek man because of his more brash personality. But if you think about it – meekness is strength under control.  It is putting your own self-serving personal desires behind the betterment of other’s lives.  It is sacrificing your own wants for the greater good of others.  Similar to Moses he is laying his life down to try to help lead millions of people’s lives (i.e. Hebrews) to their freedom from evil oppression of those from the Democratic party and the cabal (ie. Egyptians).  Trying to protect people from the evil desires of those who want to shut down Christians and churches, abort / kill babies, sexually abuse children, pursue corrupt lifestyles and operate out of evil and wicked hearts.  He is standing up for those in the church and getting repaid with hatred and vitriol from many in the church who have evil and ungodly hearts as they need spiritual deliverance. It would be much easier for him to walk away from the presidency and the horrendous abuse, lies and disrespect he takes every day from the media and Democrats and those who betrayed him from his own Republican party and family and go back to the real estate world into more seclusion, respect and peace.

So remember to choose to live a life of meekness and servanthood and for all those in the world who think they can easily take advantage of your loving, mercy heart and control and abuse you – stand up for righteousness and do what Jesus did.  After all Jesus is our true model of meekness.  He knew who he was in Christ.  He overturned the tables when he found that people turned His temple into a marketplace.  When Judas betrayed him – he could have had a legion of angels (6,000) come to defend him against the Roman soldiers but refused to call them forth.  Instead, He laid his life down for our sins because he loved us.  God loves those who choose a godly, humble lifestyle over a selfish, prideful one.

8 No, O people, the Lord has told you what is good, and this is what he requires of you: to do what is right, to love mercy, and to walk humbly with your God.

5 Blessed are the meek, For they shall inherit the earth.