KEEPING YOUR PEACE ON AS EVIL GROWS MORE WICKED AND SLY

Each week another more evil, sinister and sly plan is released around the world by evil leaders, in our countries, states, cities, towns, and churches.  People are focused on COVID-19 while they are missing the much bigger picture of those who are in evil high places as they try to take away more of our freedom and life from people who are healthy and Christian.  Little by little they want to control more and more of our lives, trying to instill fear over something that has a 98% cure rate.  There are many people who are reporting that they were contacted by their health clinics and informed that they tested positive for the COVID when they never actually stayed to get themselves tested as they had to leave since the wait took too long.  Other states are reporting exceedingly high numbers of positive results that are actually false and manufactured to make look much worse than it really is.  Now they are trying to force everyone to wear masks that are not effective to stop the virus as indicated on the boxes.  The next thing they will try to do is force people to take a vaccine that would infect people with devastating consequences.  They are also trying to cheat on the election by having mail in voter fraud and not allowing people to vote Republican. The mark of the beast is at our doorsteps and most people around the world will be willing to take it even though it will cost them their eternal salvation.  They are spiritually blind and cannot see the evil intent behind the world’s system.  Most have never even read Revelation 13: 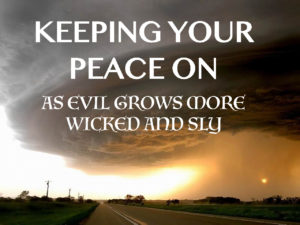 The Beast from the Sea

13 Then I stood on the sand of the sea. And I saw a beast rising up out of the sea, having seven heads and ten horns, and on his horns ten crowns, and on his heads a blasphemous name. 2 Now the beast which I saw was like a leopard, his feet were like the feet of a bear, and his mouth like the mouth of a lion. The dragon gave him his power, his throne, and great authority. 3 And I saw one of his heads as if it had been mortally wounded, and his deadly wound was healed. And all the world marveled and followed the beast. 4 So they worshiped the dragon who gave authority to the beast; and they worshiped the beast, saying, “Who is like the beast? Who is able to make war with him?”

5 And he was given a mouth speaking great things and blasphemies, and he was given authority to continue for forty-two months. 6 Then he opened his mouth in blasphemy against God, to blaspheme His name, His tabernacle, and those who dwell in heaven. 7 It was granted to him to make war with the saints and to overcome them. And authority was given him over every tribe, tongue, and nation. 8 All who dwell on the earth will worship him, whose names have not been written in the Book of Life of the Lamb slain from the foundation of the world.

The Beast from the Earth

11 Then I saw another beast coming up out of the earth, and he had two horns like a lamb and spoke like a dragon. 12 And he exercises all the authority of the first beast in his presence, and causes the earth and those who dwell in it to worship the first beast, whose deadly wound was healed. 13 He performs great signs, so that he even makes fire come down from heaven on the earth in the sight of men. 14 And he deceives those who dwell on the earth by those signs which he was granted to do in the sight of the beast, telling those who dwell on the earth to make an image to the beast who was wounded by the sword and lived. 15 He was granted power to give breath to the image of the beast, that the image of the beast should both speak and cause as many as would not worship the image of the beast to be killed. 16 He causes all, both small and great, rich and poor, free and slave, to receive a mark on their right hand or on their foreheads, 17 and that no one may buy or sell except one who has the mark or the name of the beast, or the number of his name.

18 Here is wisdom. Let him who has understanding calculate the number of the beast, for it is the number of a man: His number is 666.

You can see how easily it will be to fool most all the people in the world including those in the church as most all are not a part of the bride ( remnant) of the church.  Many are already commenting on social media that they are willing to submit to be forced to wear masks, pastors allowing their churches to be shut down as the enemy continues to keep abortion clinics and liquor stores as essential.  Walmart and other stores are now planning to force people to not be able to buy products unless they submit to wearing a mask within their stores.  Stores are also taking cash out of their methods of business transactions.  All of this is paving the path for the mark of the Beast as people are being led like lemmings to the edge of the cliff..

So what is a true Christian to do now?  Are we to fret and fear and get on the enemy’s territory biting our finger nails.  It all depends on where your faith is.  Do you believe that your current job and submitting to your employer’s ungodly edicts is the only way possible to endure the coming storm?  Do you believe if your church shuts down that you simply have to agree to watch watered down state government approved messages online? Do you believe that you have to strive to make money to survive or live on a farm and produce your own food?  Or do you have complete faith and trust that God will provide for you just like He provided for the Israelites in the desert and with the ravens for Elijah.

When we trust in God to meet all our needs then we never need to worry for one second, let alone for a week or month or year.  When you can trust the Lord to provide and protect you and shut down the enemy from talking to your mind, then you can deal with anything without fear.  You don’t look upon your circumstances or the mountains in your way…because you know that whatever comes up before you – that you will be able to stand against.  No weapon formed against you shall prosper.  Greater is He that is within you then he that is in the world.

I remember when I began to learn about living in divine health from the Lord in 2009.  The Lord told me that as long as my faith was in Him that He would heal me from anything the enemy tried to put on me.  But if my faith became fear – and I only had faith that man’s medicine and doctors could heal me – then I would have to deal with the consequences of whatever they could do and then have to pay the price.  So the enemy tested me many times – with a back disc that popped out, a bulge in my back, sciatic pain, a toothache, lung breathing challenges – and I stayed trusting in God the entire time and he healed me of everything.  I have not taken any Tylenol or aspirin or other OTC or prescribed medications since 2008 – nothing.  Not even vitamins or supplements. God was faithful and healed me of everything the enemy tried to give me for the past 12 straight years.  I have no healthcare – no insurance – and I have been at peace every day.

The Lord had me travel in ministry non-stop from Phoenix to Las Vegas to California, Oregon, Seattle, Montana, Wyoming, Colorado, Minnesota and Indiana when the COVID-19 pandemic started from March until July so far. I am now going to be doing ministry in hotels in Minneapolis, MN,  West Des Moines, IA and Omaha, NE in August and then other churches and ministries in September and the rest of 2020. I have not had one ounce of fear – and no one who attended any of my meetings received COVID either.  I trust the Lord for my financial needs and never ask people on social media for money to be donated and the Lord has always provided. We must stay in peace and trust God for His protection and provision all the time and never lose our peace!!  The world is getting more evil and sly every day – but we do not have to follow the world – as we should be a light to everyone.