THE BEST TACTICS TO HELP A LOVED ONE GET DELIVERED

Every day people write to me asking how they can get their spouse or loved one delivered from the demons tormenting their minds.  We must understand first and foremost that if the person is not your child and is over the age of 18 that we cannot impose our desires over their own choice of freewill.   They can keep living the same way they always have and continue to allow their demons legal right to torment them if they want to.  If the person is our child and 18 and under then we do have legal rights to an extent to command the demons to be gone.  Of course if we are the ones who have hurt them or your spouse then its best to apologize to them and own your own issues so they can forgive you for what you did to hurt them which takes away legal rights of the demons to torment their minds. Then you can take authority and command the demons to go.  If they have been satanic ritually abused then usually it will be more of a process to help them forgive those who have hurt them and then taking authority to cast the demons out and making sure they don’t continue to get abused.

Let’s talk about a spouse who has been hurt growing up (a parent, step-parent, sexual violation, anyone else who has hurt them) who has soul wounds and then demons have legal rights to torment their thoughts which causes them to behave in ways of the flesh and not of the spirit.  So let’s say you have been married to them and they treat you in ungodly ways (controlling you, manipulation, lying to or about you, acting prideful, speaking harshly to you and often for hours at a time, your sexual relationship is not godly, etc.). They usually are operating in the spirit of Jezebel and Leviathan and are very mean and bully you so will make it miserable for you. The demons in them are tormenting their minds telling them to take our all their pain and bitterness on you. There are millions of people who suffer every day from these types of people.  Some would be diagnosed as a Narcissist from the psychological community.

So what are the best tactics to do to help a spouse see that they are the ones with the issues so they don’t blame you for it and can get delivered? 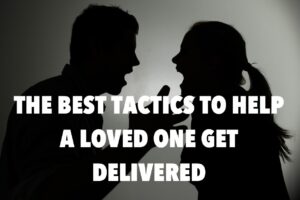 If they refuse to watch any videos or read books or own any of their own issues then usually you will have to take the action of separating from them in order to give them a better chance to see that the issues are within them and to allow you to have peace instead of living in constant strife that will make you sicker and sicker and can lead to death.  Most people do not want to separate for convenience sake but we are told in the Bible to not tolerate the spirit of Jezebel.