BRACE YOURSELF FOR AN INCREASE OF JEZEBEL ATTACKS

As we move into the months of September and October the enemy is planning an increase in attacks from the spirit of Jezebel.  Jezebel’s goal is to lie and come against those who are truly God’s remnant warriors doing mighty things for the Lord in order to render them wounded and trying to stop them from getting people delivered and freed from the torment of Satan.   Jezebel wants to control and manipulate you to do what they want and not do what God wants. There are many who have felt affects from people with the spirit of Jezebel in 2020 as time is getting shorter for Christ’s return.  Jezebel has been lying about godly people worse than ever trying to turn as many away from following them, trying to cause people who love the Lord to give up because the pressure is getting too strong.

Jezebel has been planning an all-out assault on God’s remnant and bride for these next two months unlike anything we have seen thus far.  So the Lord is telling everyone to be awake, and on the look-out and to stay aligned closely with the Lord in every aspect of their lives, especially when it comes to healthy relationships, staying sexually pure in all ways with no blemish.

Jezebel loves to accuse you of things that are not true in order to render you useless and try to get you to give up.  They lie to other people about you to create a tsunami wave of anger and hatred from as many people as possible to cause you to run into your cave so that you cannot even function as you become so distraught and depressed. 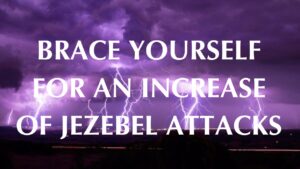 4 You are of God, little children, and have overcome them, because He who is in you is greater than he who is in the world.

One of the main attacks of Jezebel is to assassinate your character which is why it is more important than ever to stay pure and spotless before the Lord.  If Jezebel can convince people that you are evil like they are then they can defeat you doing anything significant for the Lord and keep you beat down like a whipped puppy.  The best response to people who attack you is no response.  Let God defend you. Ignore your attackers as if they don’t even exist.  Jezebel wants you to feel like you have to defend yourself from their lies but any retaliation is a lose – lose proposition.  Once you have overcome the initial onslaught the Lord will re-position you to an even stronger level and His anointing and favor will more than compensate for the attacks.

11 Blessed are you when they revile and persecute you, and say all kinds of evil against you falsely for My sake. 12 Rejoice and be exceedingly glad, for great is your reward in heaven, for so they persecuted the prophets who were before you.

There are many who have been positioned by Satan in the church and ministries who are being activated to come against God’s people and bride in the coming months so be ready by not giving him any ammunition and aligning yourselves closely with the Lord.  The witches in the church and ministries are on the prowl more than ever now. Keep your head down and hand on the plow and continue to do what the Lord has directed.  God is actually removing many from ministry in 2020 who refuse to get their soul wounds cleansed and delivered from their demons.  They are no longer having a following and they are losing their positions of power in the church and are being forced into secular jobs to get their lives right with the Lord.

15 “Beware of false prophets, who come to you in sheep’s clothing, but inwardly they are ravenous wolves. 16 You will know them by their fruits. Do men gather grapes from thorn-bushes or figs from thistles? 17 Even so, every good tree bears good fruit, but a bad tree bears bad fruit. 18 A good tree cannot bear bad fruit, nor can a bad tree bear good fruit. 19 Every tree that does not bear good fruit is cut down and thrown into the fire. 20 Therefore by their fruits you will know them.

God is pruning those who have bad fruit and it’s a painful process for those of us who are searching for who we can trust in the church.  There are MANY who are not healed from their past soul wounds and operating in demonic spirits whose goal is to come against.  They call themselves pastors, prophets, apostles, revivalists, etc. but have not been delivered from the demons tormenting their minds.  They are on a warpath to try to destroy God’s people and it is imperative that all pursue deliverance in order to have God’s protection and provision during the coming months of September and October.  No longer is the hyper grace and love messages going to cut it as they are not preparing the masses to truly be able to stand up to the enemy’s attacks.  Once the music wears off and it’s you versus the enemy then you need to be strong in being freed from all sexual perversity and sins of the flesh and walking in your authority of Christ with you at all times.

So be prepared and brace yourself for the coming enemy tsunami wave about ready to hit you.  Be strong and courageous.  You can do it but you need to be firmly grounded in knowing who you are in Christ and not standing in quicksand sinking into the ground of fear.  Have nothing in common with the enemy and everything in common with Christ.