This past weekend in Chicago something amazing happened as people came from California, Washington, DC, Iowa, Wisconsin, Illinois and Indiana to the Marriott in Naperville, IL.  They all had something in common. They were desperate for peace.  They wanted peace in their own personal lives. They wanted peace in their marriage with their spouse.  They wanted peace for their children and their parents and family.  They wanted healed from their past emotional wounds and physical pains. They were from varied ethnicities, African American, Hispanic, Asian, White, etc.  They were from varied church denominations.  Some people came who had followed Restored to Freedom for years but 75% came who saw an ad on Facebook for a week or two prior and never heard of Nelson Schuman.  Many said that they felt the Lord tell them to come and attend so they could receive freedom from their past wounds and healings.  Every seat in the room was taken and the Marriott staff had to find additional chairs to bring in.

A man from Iowa drove five hours one way to attend and then when it was over at 9:30 pm drove all the way back home arriving five hours later.  A couple of girls from Wheaton College had just happened to see the Facebook ad a couple hours before the event started and were drawn to come.  They stayed near the very back in case something weird happened so they could run out.  Nothing weird happened – so they stayed until after it was over to get personal ministry of additional deliverance.  A mother brought her 17-year-old daughter for freedom from anger and depression.  A family came to get deliverance for everyone so they could enjoy more peace, joy and love.  A man just wandered into the meeting about 20 minutes after it started who was obviously desperate for peace as he put his hands up and said he needed prayer and stayed through the soul wound healing from past wounds to the end when we cast out the strongest demons tormenting people feeling more peaceful.  A ministry woman who had done deliverance for over 30 years said she learned so many new things and was glad she attended. One woman got a flat tire on the interstate on the way but didn’t let it stop her as she found other transportation so she didn’t miss it!

People are desperate for peace in their minds, lives and marriages and the only way is through forgiving people from our past who have hurt us, breaking off generational curses, repenting for our pride and sins against others and getting delivered from demons that have tormented our minds our entire lives.  Sadly most churches refuse to allow their people to get delivered in the church so God is bypassing the roadblocks and doing them in hotels around America.  Marriott hotels – which are owned by Mormons – to boot.  Amazing!  We do deliverance in a normal and calm way – not like you would see in various scary movies.  It’s a very simple process of having the Holy Spirit show you traumas and wounds from your past that you have not forgiven people completely yet for hurting you.  Then having Jesus give you a word of insight as to why it happened to you (allowing you to see that the people who hurt you had demons which caused them to hurt you) and then truly forgiving the people in your hearts.  Then repenting for your own pride and the sins that you have done.  Then the most important part that many inner healing ministries and churches are afraid to do yet Jesus did for 1/3 of his ministry time – command the demons to go! 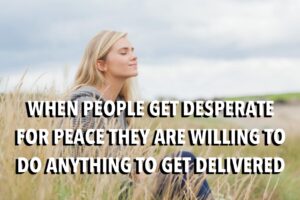 People are desperate for the truth – and if they cannot get freed from their past pains by taking medications, attending churches who preach that Christians cannot be affected by demons, listening to pastors and evangelists who do not know how to get people delivered – then they will seek out those who know the truth and are seeing the results of peace, healing of emotional traumas and physical pains and sickness. Deliverance is the key to getting people in the body of Christ to become the bride of Christ, the remnant and to getting revived so that the world can see and want a revival of epic proportions.  You cannot have revival until you have repentance and deliverance in the church.

As this continues to grow – God is using those who have been abused the worst from demons in people to help others get set free.  The abused are now being promoted to helping others who were abused to get delivered and freed.  People who were satanic ritually abused are finding people who can help them get freed and then paying back the enemy for all the evil the demons did in people to them.

People who are delivered have more fun.  They laugh, smile, are pure and clean inside, have good hearts and minds and actually have fruit of the spirit as evidence of their true Christianity.  There are too many in the church who are fake Christians, love their titles, sinning more than those outside the church, and are lying about godly people trying to infect more with their demons and stop God’s called from accomplishing His directives.  So many marriages where one person is sent on assignment from Satan to stop their spouse from doing ministry and trying to give them diseases through constant verbal barrages that last hours and doing it every couple of days.

Jesus is coming back for a pure and spotless bride and too many in His church are not truly saved.  Their fruit stinks as they are still listening to demons and agreeing with the 50-60,000 negative thoughts a day that they are hearing.  God gives us freewill to choose to be honest and humbling ourselves and choosing to forgive others like Jesus did when He was dying on the cross.  Or we can lie and act like we are godly yet continuing to behave prideful and of Satan not having any godly fruit as evidence.  Get real before it’s too late.  You can do it.  Choose freedom through forgiveness, repentance of pride and sin and then enjoy your new-found life in Christ.

The Lord is having me add new venues every week around America to help more get delivered, healed and freed – you can check out the current event schedule on Facebook at Facebook.com/RestoredToFreedom/Events or on the home page at RestoredToFreedom.com