People who struggle with the spirit of Jezebel are unable to keep people who are godly as close friends because their spirits are not the same.  When you have a godly spirit within you and have interactions with people who operate under the spirit of Jezebel you will eventually discern their ungodly spirit and behaviors and ultimately pull away from them.  People receive the Jezebel spirit when they are hurt growing up (by fathers, mothers, step parents, sexually violated, etc.) People with Jezebel love to go to church and get into ministry leadership positions so they can shut down the true Holy Spirit from flowing and so they can control more people (including their spouse) and take out their past pains and hurts on their current relationships. You can diagnose those who operate in the spirit of Jezebel because they operate in the following characteristics: 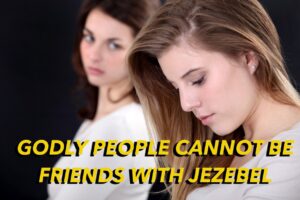 So what happens is those who are of the Lord and operate in the fruit of the spirit (love, joy, peace, patience, kindness, goodness, faithfulness, gentleness, self-control) eventually discern over time that people with the Jezebel spirit are not godly or good and will distance themselves from those who operate in Jezebel.  As they get older the only close friends they have also operate in the spirit of Jezebel as like spirits attract to each other and if you do not operate in demonic spirits then you will not want to be around those with demonic spirits.  Jesus talks about this in Luke:

People with Jezebel love to come against godly people to lie about them to other people and try to convince them that the good people are actually bad but over time when people spend time around the good people they know that the Jezebel person lied about them.  Often times the Jezebel person accuses their victims of the very thing that they are doing. There is a saying that “birds of a feather flock together” and it is true.  The only long-time friends that Jezebel will have is those who also have Jezebel. If a person tries to act like they are godly yet goes out and parties on the weekends and gets drunk or acts sexually perverse – then you eventually learn they are liars and you don’t believe them nor want to hang out with them.  The goats are being exposed from the sheep.  The tares are being exposed from the wheat.  Godly people simply cannot be friends with those who operate in Jezebel.  It’s time to cleanse yourself from those who are not of the Lord.