I hear from thousands of people each year who have struggled through being emotionally, physically or sexually abused in their relationships, often times for much of their lives (marriages, fathers and mothers, step fathers, church leadership and those who attend, friends, etc.).  Most people who attend church who have been married have been preached to that God hates divorce and so feel like they must stay in a toxic, abusive relationships until death do they part.  Of course God hates divorce – but He also hates abuse which causes the victims to feel sick to their stomachs and often receive diseases and a slow death due to the unhealthy control, feel scared of their spouse and have to walk on egg shells every day while submitting to the demons in their spouse, parents or others.  Does God actually want you to stay submitted to a person whose demons are manifesting on you every day, verbally and emotionally abusing you for hours every day, causing you to feel worthless at best and suicidal at worst, dying slowly inside your body, soul and spirit every day and unable to do anything for the Lord?  Absolutely not.  And abuse does not have to be loud and violent as soft control that is subtle to stop you from having freedom to choose and doing what the Lord has called you to do is just as wrong.

God wants us to live in peace and submit to Him and His desires for our lives and if we submit to the demons within our spouse or others we will never be able to do anything for the Lord.  Thus the approach that should be taken when we are being abused by our spouse (men who abuse women, or women who abuse men) is to make them aware that you will no longer tolerate the ongoing abuse and suggest that they go through inner healing and deliverance so that they can be healed from their past soul wounds and delivered from the demons tormenting their soul (mind, will and emotions).  Restored to Freedom has hundreds of videos on YouTube and Facebook that will help people get healed and delivered from their past wounds and demons so they can live in peace and joy instead of torment.  There are many testimonies from people around the world whose lives have been set free and delivered and marriages saved.  The goal of Restored to Freedom is to get people to humble themselves and to be honest to own their own issues so their issues will not own them. They have free will to choose to be honest and work to forgive those who have hurt them when they were growing up and then commanding their demons to go or to lie and follow their demon’s instruction of blaming everything wrong with them on their victim spouse. 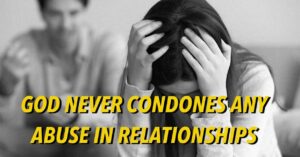 If they refuse to repent and humble themselves then their victim spouse needs to pray and get a confirmation from the Lord when it is time to separate in order to allow both parties to pursue inner healing and deliverance with the goal of reconciliation.  This is when the abusive spouse will need to make a decision to either own their own issues and be honest and pursue inner healing and deliverance or they will lie about their victim spouse and get others to feel sorry for them with false stories and to blame their issues on their spouse.  If they reject to be honest and pursue inner healing and deliverance then they will usually pursue a smear campaign to play the victim and get sympathy from people and try to control their spouse through lying about them and getting others to hate on them.  At that point the Lord will confirm when it is time for permanent separation through allowing the divorce so that the victim can survive and get healed from their emotional (and possibly physical and sexual) abuse and then be able to pursue the calling the Lord has on their life.

It grieves me when people choose to live in their lies and allow their demons to rule their lives and keep their pride instead of owning their own issues.  Usually their victims are grieved over trying to love a person who was truly unlovable due to them hearing demonic voices controlling them to hurt the person who loved them.

If you have a parent who abuses you then you need to love them from afar.  Honoring them does not mean tolerating their abuse every day while they go off on you on the phone or in person.

When you choose to be delivered and operate out of a pure and godly heart and soul – then you cannot allow someone close to you to control or abuse you anymore.  Their demons want to stop you from doing what Jesus wants to do with you.  It is not an easy choice but when God asks you “who are you going to serve….the demons in another person or Me?” then you need to always choose the Lord.  We don’t give up on the person abusing us – we give them up to the Lord to deal with and minimize the amount of time that they can hurt us so we can do what the Lord has called us to do.