THE ENEMY CONTROLS PEOPLE BY LYING & HIDING THE TRUTH

The Truth Shall Make You Free

31 Then Jesus said to those Jews who believed Him, “If you abide in My word, you are My disciples indeed. 32 And you shall know the truth, and the truth shall make you free.”

33 They answered Him, “We are Abraham’s descendants, and have never been in bondage to anyone. How can You say, ‘You will be made free’?”

34 Jesus answered them, “Most assuredly, I say to you, whoever commits sin is a slave of sin. 35 And a slave does not abide in the house forever, but a son abides forever. 36 Therefore if the Son makes you free, you shall be free indeed.

So many people are deceived from the truth and believing lies in the world about people.  Satan caused the Pharisees and scribes to hate Jesus because He spoke truth about their pride and deceit and sin. So the demons in them lied about Jesus to get people to hate him and ultimately kill him.  Jesus’ truth set people freed from their bondage from demons but it was their choice as they had freewill. Paul had many people who hated him for telling the truth about Jesus and salvation and had people lie about him to turn others away from his message and they attacked him greatly as he suffered much.  People who struggle with demons and refuse to get delivered hate those who speak the truth of Jesus.  They will lie to other people about you to turn them against you to hurt you. 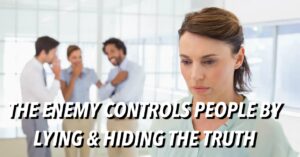 16 I say again, let no one think me a fool. If otherwise, at least receive me as a fool, that I also may boast a little. 17 What I speak, I speak not according to the Lord, but as it were, foolishly, in this confidence of boasting. 18 Seeing that many boast according to the flesh, I also will boast. 19 For you put up with fools gladly, since you yourselves are wise! 20 For you put up with it if one brings you into bondage, if one devours you, if one takes from you, if one exalts himself, if one strikes you on the face. 21 To our shame I say that we were too weak for that! But in whatever anyone is bold—I speak foolishly—I am bold also.

30 If I must boast, I will boast in the things which concern my infirmity. 31 The God and Father of our Lord Jesus Christ, who is blessed forever, knows that I am not lying. 32 In Damascus the governor, under Aretas the king, was guarding the city of the Damascenes with a garrison, desiring to arrest me; 33 but I was let down in a basket through a window in the wall, and escaped from his hands.

President Trump also has had so many people who lied about him including the liberal media, the Democrats and even some who attend church and would call themselves Christians.  Yet he is still trying to help people to be freed and not shut down like the Democrats are trying to do to hurt America as they have sold out to other countries who want to see America destroyed and taken over by Socialism.  Trump has laid down his life to serve the country he loves by trying to save innocent babies from being killed, women and children to be freed from sex trafficking, children are being saved from the pedophiles, keeping law and order in America and bringing the evil ones to justice who have been in power over this world for too long. So many people are spiritually blinded at what the enemy is trying to do to bring down America.  Even some of his own people have betrayed him.  All it takes is the liberal media to put their lying slant on the truth to make Trump look bad and they do it every day including Google and Big Tech companies like Facebook, Twitter and Instagram who censor the truth from being exposed. Yet he is trying to expose those in the world who have cheated in the election to steal it from him when he actually won it so that he can continue to what is best for the people of America and the world.  People who are completely blind in the spirit cannot see the simple truth that Trump is good and those who oppose him are very evil because they have been brainwashed by those with evil agendas.

So when it comes to one’s own personal life in the world – those who have evil intentions in their hearts will lie about God’s good people to try to turn others away from them believing their lies.  Many will believe what a person says about another person and not question it because most people believe what a person tells them because they don’t want to think they are being lied to when many times they are being lied to.  So many people are believing lies about good people which will turn them away from talking to them.  Then they will believe lies about bad people that try to make them think  that they are actually good.  That is what is so difficult in today’s world to discern.  So a good rule of thumb today is that if the liberal news networks are against someone then they are actually a good person.  If they are for someone then they are actually bad.  That is why it is so critical to discern the truth and not fall for the lies.  It is like we are living in a real-life movie where those who are doing bad try acting like they are godly and they can dupe most people.  So when COVID was first released and the world started to shut down and overreact it was conditioning the masses to obey the evil ones’ plan to shut down America’s economy based out of a false fear so they could cheat on the election (aside from the rigging of the voting systems) and mail in a lot of ballots that were not official.  Now the Democrats want to take over before it is exposed of all the fraud they did to steal the election so they can shut down the economy again and make the small businesses go bankrupt in order to implement Socialism.

So pray for discernment that the Lord will show you people you can trust and those you cannot.  Too many people are clueless and are believing completely fabricated lies from people who are mad at other people and want you to hate on them with them.  If a person cannot control their victim then they will recruit others to control them through their lies to get them to hate them.  To know who is lying look at their fruit closely over time.  They will try to act nicely to your face but if you watch them long enough they will mess up and you will see the real them.