Jesus knew what being persecuted by the religious elect was like as he had many Pharisees and Scribes who were filled with pride and arrogance who were jealous of His knowledge and hated Him when he pointed out their hypocrisy.  The same demonic religious spirits that were speaking through the Pharisees and Scribes of Jesus’ day are still speaking today.  There are many who are leaders in today’s church who are filled with pride (the Leviathan spirit – Job 41) and piousness instead of the humble heart of Jesus, and they desire to kiss up to the head pastors, elders, etc. in order to position themselves for people to admire in order to show off their gifts of prophecy, musical talents, and teaching in order to make themselves look good all the while making up lies and gossiping about other people in the church to ultimately hurt them.  While it is never enjoyable to have people believe lies and half truths about you…you can take solace that Jesus and Paul and the other disciples went through the same thing.  And suffering for doing good is far better than when the Lord corrects those who are doing evil (as they will have consequences for their actions and words).

“And who is he who will harm you if you become followers of what is good? But even if you should suffer for righteousness’ sake, you are blessed. “And do not be afraid of their threats, nor be troubled.” But sanctify the Lord God in your hearts, and always be ready to give a defense to everyone who asks you a reason for the hope that is in you, with meekness and fear; having a good conscience, that when they defame you as evildoers, those who revile your good conduct in Christ may be ashamed. For it is better, if it is the will of God, to suffer for doing good than for doing evil. For Christ also suffered once for sins, the just for the unjust, that He might bring us to God, being put to death in the flesh but made alive by the Spirit,” 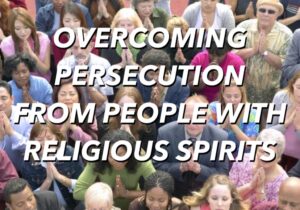 ““Beware of false prophets, who come to you in sheep’s clothing, but inwardly they are ravenous wolves. You will know them by their fruits. Do men gather grapes from thornbushes or figs from thistles? Even so, every good tree bears good fruit, but a bad tree bears bad fruit. A good tree cannot bear bad fruit, nor can a bad tree bear good fruit. Every tree that does not bear good fruit is cut down and thrown into the fire. Therefore by their fruits you will know them.”

And those who are not doing the will of God will ultimately not enter into heaven.

““Not everyone who says to Me, ‘Lord, Lord,’ shall enter the kingdom of heaven, but he who does the will of My Father in heaven. Many will say to Me in that day, ‘Lord, Lord, have we not prophesied in Your name, cast out demons in Your name, and done many wonders in Your name?’ And then I will declare to them, ‘I never knew you; depart from Me, you who practice lawlessness!’”

So understand that when people persecute you while you are doing God’s work – you will ultimately receive a blessing and favor from the Lord.  It may take a few years – but the Lord knows the truth of what you have overcome so trust Him that He has your back and you will ultimately be blessed to see good things come from your suffering for His sake.

“Thus says the LORD: “Cursed is the man who trusts in man And makes flesh his strength, Whose heart departs from the LORD. For he shall be like a shrub in the desert, And shall not see when good comes, But shall inhabit the parched places in the wilderness, In a salt land which is not inhabited. “Blessed is the man who trusts in the LORD, And whose hope is the LORD. For he shall be like a tree planted by the waters, Which spreads out its roots by the river, And will not fear when heat comes; But its leaf will be green, And will not be anxious in the year of drought, Nor will cease from yielding fruit. “The heart is deceitful above all things, And desperately wicked; Who can know it? I, the LORD, search the heart, I test the mind, Even to give every man according to his ways, According to the fruit of his doings.”

I have seen time and time again whenever I have endured persecution and attacks that the Lord always blesses me greater and His anointing always increases.  Jesus had to endure it, Paul had to overcome tremendous attacks, as the Lord uses those who have suffered much for Him to see great fruit for the Lord in their lives and ministries.  At the end of the day those who attack and insult and lie about you will be dealt with by God.  Keep in mind that those who attack you will face the wrath of God as sons (and daughters) of disobedience, especially those who are in the church and have jealousy and evil desires in their hearts to come against those who are doing God’s work.  So just give them to the Lord and ignore them and continue to be about your Father’s business.

Not Carnality but Christ

3 If then you were raised with Christ, seek those things which are above, where Christ is, sitting at the right hand of God. 2 Set your mind on things above, not on things on the earth. 3 For you died, and your life is hidden with Christ in God. 4 When Christ who is our life appears, then you also will appear with Him in glory.

5 Therefore put to death your members which are on the earth: fornication, uncleanness, passion, evil desire, and covetousness, which is idolatry. 6 Because of these things the wrath of God is coming upon the sons of disobedience, 7 in which you yourselves once walked when you lived in them.

8 But now you yourselves are to put off all these: anger, wrath, malice, blasphemy, filthy language out of your mouth. 9 Do not lie to one another, since you have put off the old man with his deeds, 10 and have put on the new man who is renewed in knowledge according to the image of Him who created him, 11 where there is neither Greek nor Jew, circumcised nor uncircumcised, barbarian, Scythian, slave nor free, but Christ is all and in all.

Character of the New Man

12 Therefore, as the elect of God, holy and beloved, put on tender mercies, kindness, humility, meekness, longsuffering; 13 bearing with one another, and forgiving one another, if anyone has a complaint against another; even as Christ forgave you, so you also must do. 14 But above all these things put on love, which is the bond of perfection. 15 And let the peace of God rule in your hearts, to which also you were called in one body; and be thankful. 16 Let the word of Christ dwell in you richly in all wisdom, teaching and admonishing one another in psalms and hymns and spiritual songs, singing with grace in your hearts to the Lord. 17 And whatever you do in word or deed, do all in the name of the Lord Jesus, giving thanks to God the Father through Him.