I will start by premising this blog by stating that if you are trying to resolve a conflict with a person who has not been healed of their soul wounds and delivered from their demons then you will simply frustrate yourself because the other party will usually not be able to rationally discuss much of anything and cause the point of contention to not be addressed while they take you around in circles.  They will often manifest into anger and accusatory tones and blame you for not agreeing with them.  Thus it is impossible to resolve conflict in a healthy way with anyone who is not healed from their past wounds and delivered from demons (which is most all people in the world and many in church).   Sorry to have to make that disclaimer but it is the truth.  People who largely hear demonic thoughts in their minds (most all people) will have personal agendas, selfish motives and ungodly intentions of their hearts and not play by healthy rules.  They have been used to escalating themselves in anger and talking on and on in order to wear people down to give them what they demand. Most people learn over time to simply keep themselves away from these toxic people as much as they can so they can stay in peace.  It is not easy when you are married to them, they are your parent or child or you have to report to them in a job.  You simply do your best to negotiate with them but usually you must walk on eggshells around them which is never healthy and give in to their unhealthy demands to try to have any semblance of peace. 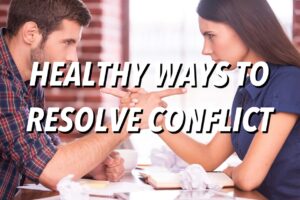 So for those who are healthier or more spiritually mature in the Lord, with fruit of the spirit as evidence (largely have grown up with more loving parents and not had as many sexual violations done to them) what are the healthiest ways to resolve personal conflict?

Inner healing and deliverance is the number one method of helping people to reduce their conflicts on a daily basis.  Choosing to forgive the people in our past who hurt us, repenting for our pride and sin and commanding the demonic spirits to be gone from our soul changes people to being more Christlike and having true fruit of the spirit.