Most relationships have one person who takes on the same characteristics of Jezebel and the other person like Ahab in 1st and 2nd Kings. People get the Jezebel spirit because of being hurt growing up by their mom or dad or step parent or others or through sexual violations (viewing porn, touched, molested or raped). This causes them to hear demons and they want their own way and to control their spouse and others. They then look for a partner to marry who they can control who is willing to compromise and tolerate their ungodly demands who will give in to them, which is the Ahab spirit. People get the Ahab spirit because they have a parent who gives in and compromises and aligns themselves with that spirit.  Ahabs have a comfort level with their spouse demanding their way in order to help get them what they want.  Ahab wanted Naboth’s vineyard but when he asked him to sell him his vineyard so he could turn it into a garden Naboth refused.  So Ahab told Jezebel that Naboth refused to sell him his vineyard so she got him the vineyard by coming up with a plan and sending it out to the leaders where Naboth lived and inviting Naboth to a banquet in honor of him.  Then she had two scoundrels accuse Naboth of blaspheming God and coming against King Ahab so they took him outside and stoned him, killing him and then giving his vineyard to Ahab.  Later God told Elijah who confronted Ahab who repented to buy himself more time to live but he ultimately was killed.  Ahab did more evil in the sight of the Lord then all the other kings because Jezebel stirred him up.

Today the two spirits of Jezebel and Ahab work in tandem to compromise living a godly life but wanting to appear godly. They affect people today who are in the church. Both will struggle with pride because they both were hurt growing up and the Leviathan spirit (Job 41) tells them not to trust anyone to make decisions for them and that their decisions are the best.

So most relationships are like Jezebel and Ahab because their demons attract to each other and sabotage everything that God wants to do.   They tolerate sin and come against the true Holy Spirit from operating.  They cause people to operate in the flesh and do not have the fruit of the spirit according to Galatians 5:16-26. 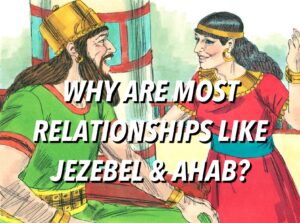 Below are the various characteristics of the spirits of Jezebel, Leviathan and Ahab:

– Angry when you are happy

– Push their victims to have sex before marriage

– Master Liar and half truths

– Desire for power and leadership

– Little to no empathy for their victims

– Mock you and make fun of you, belittle you

– Ruin holidays and birthdays and anniversaries

– Suspicious of your intentions / paranoid

– They accuse you of doing what they actually do

– Rarely ever admit they are wrong or apologize

– Gossip and spread rumors against their victims

– They act assured but are very insecure

– Cannot stand to be told no

– Demand you do whatever they tell you

– Enjoy starting arguments as they never want anyone to have peace

– Very secretive to cover up their lies

– Want you to spend lots of $ on them and believe they deserve the best. Often need $ and drains their victims of $

– Once they can no longer control you will discard you

– Perfectionistic – but their decisions are not good

– Betray you and very disloyal

– Love their titles (prophet, pastor, apostle, etc.) which they often purchase online or are self-appointed

– Prey upon the mercy hearts of others

– They also keep their phones very very close to them and never leave it behind even to get out of the vehicle to pump gas and get back in. And most will also have a lock on their phone with a password. But will not allow their partner to have a lock on their phone. They will call their partner a million times if they go somewhere and if they don’t answer they will get mad and say why didn’t you answer your phone. And they will make life miserable the whole time you are away by constantly calling and interrupting what you’re doing. Because usually they cheat and want to make sure their partner isn’t doing anything to them. Because that is what they do when they leave.

– Accuse their victim of being a Narcissist/ Jezebel

– Prideful (think they are better than someone else, opposite of humble)

– Twists communication in their minds

– Wraps around spine and twists

– Many other sicknesses / diseases / afflictions

– Often has a position of influence & have money

– Has a hard time being a strong spiritual leader

– Strong desire to make everyone happy

– Afraid of being rejected and alone

– Compromises on sexual purity in relationships (often Jezebel will seduce)

– Believe it is your duty to make everyone happy and comfortable

– Have a challenge making decisions

– Happiness and peace based on current circumstances and how loved, affirmed and accepted they feel

– Usually do not forgive yourself and often has issues with God

– Overly merciful and sees the best in everyone – overlooks too much

– Forgive others too quickly without making them aware of their offenses