HOW DOES GOD EXPECT US TO LIVE A SEXUALLY PURE LIFE?

God holds both men and women accountable for living a sexually immoral life.  Let’s talk about how men and women interact in public. God does not want men to lust after or ogle women regardless if the woman is wearing any clothing to allure them in a sexual way or not and women are not to wear clothing that sexualizes their body with tight fitting clothes or too revealing of their breast cleavage or trying to attract attention to them in any ungodly sexual way.  God expects all of us to wear clothing that is appropriate for a Christian.  Simply put – both men and women should dress and behave as if Jesus was in the room with them. But most Christians and non-Christians do not do what God expects. 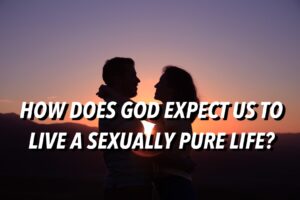 It comes down to a person’s intentions in their heart.  If people are constantly thinking in ungodly sexual ways and acting upon their sexual urges or want people to stare and lust after them then they need healed from their past sexual wounds and delivered from their lustful demons.  I have done thousands of soul wound healing and deliverance sessions with people and over 90% of them have been either exposed to ungodly sexual images or videos, touched sexually, molested, fondled, incest, or raped prior to age 18.  When that happens to most all of us then demons of lust have legal rights to cause us to want to act out sexually in improper and ungodly ways which then continue to haunt us our entire lives unless we get healed and delivered.  About 50% of pastors struggle with looking at porn.  That is why most pastors can’t even preach against it because they know they would be hypocrites as their demons are telling them.  That also helps to explain why 50% of the church attenders get divorced.

It is one thing if a man glances for a second, noticing an attractive female walking down the street or at a restaurant or at work or the gym and an entirely different thing if he continues to ogle and allows lustful thoughts to occur of wanting to have sex with her.  So both men and women need to behave sexually accountable to the Lord.  Understand that Hollywood and the world (through TV, movies and ads) glorifies and objectifies women as they tell women that they need to dress in ways that are sexy and not to live a life like a stuffy old Proverbs 31 woman.  That does not ever give a man who calls himself a Christian any rights to stare lustfully at any woman, however she is dressed.  Women who are church goers and in ministry need to dress appropriately as if Jesus was in the room. Unfortunately there are many women who dress in ways to sexually draw attention to themselves.  So it goes both ways….men and women both need to dress as if Jesus was in the room and not lustfully look upon each other.

Think about the damage that was done when David looked out his palace window at Bathsheba lusting after her when watching her take a bath.  Then inviting her into his palace to have sex with her.  Then she got pregnant with his child and he tried to get Bathsheba’s husband Uriah (who was battling David’s enemies in war) to sleep with Bathsheba to cover up his sin but Uriah was a godly man of integrity and refused to have sex with his wife as he was supposed to be with his fellow soldiers fighting their enemy together.  So then David acted to have Uriah killed in battle and then brought Bathsheba in as his wife.  But prophet Nathan called out David for his sin and it ultimately cost David his child with Bathsheba. So there is always negative consequences when we choose to live a sexually immoral life. God later redeemed David with allowing him to have a son named Solomon.

So what does the Bible say about allowing sexual sin in our lives?

But I say to you that whoever looks at a woman to lust for her has already committed adultery with her in his heart.

Flee from sexual immorality. Every other sin a person commits is outside the body, but the sexually immoral person sins against his own body.

For this is the will of God, your sanctification: that you abstain from sexual immorality; that each one of you know how to control his own body in holiness and honor, not in the passion of lust like the Gentiles who do not know God;

No temptation has overtaken you that is not common to man. God is faithful, and he will not let you be tempted beyond your ability, but with the temptation he will also provide the way of escape, that you may be able to endure it.

Let marriage be held in honor among all, and let the marriage bed be undefiled, for God will judge the sexually immoral and adulterous.

Turn my eyes from looking at worthless things; and give me life in your ways.

So you also must consider yourselves dead to sin and alive to God in Christ Jesus. Let not sin therefore reign in your mortal body, to make you obey its passions. Do not present your members to sin as instruments for unrighteousness, but present yourselves to God as those who have been brought from death to life, and your members to God as instruments for righteousness. For sin will have no dominion over you, since you are not under law but under grace.

Put to death therefore what is earthly in you: sexual immorality, impurity, passion, evil desire, and covetousness, which is idolatry.

For this is the will of God, your sanctification: that you abstain from sexual immorality;

But because of the temptation to sexual immorality, each man should have his own wife and each woman her own husband.

Once a person is exposed to improper sexual images, touched, or molested, viewing naked people, etc. (usually happens prior to age 18) then demons will cause them to struggle with living a sexually pure lifestyle for the rest of their lives.  Understand that just because a person asks Jesus to come into their hearts that demons are not forced to leave them alone and will continue to cause them to struggle.  The demons have legal rights to tempt them, give them sexual urges through continuing to allow sexual images to replay in their minds, interacting with people in sexual ways, lusting, dreams, etc.  Many who have given themselves over to their compulsive sexual urges / masturbation often describe that their struggle to resist acting out is as addictive as narcotic drugs.

So how does a person who truly wants to live a sexually pure life actually do it? The most effectiveness that I have seen in helping people to live a sexually moral lifestyle is to get them healed and delivered from their sexual violations that happened to them when they were growing up.  They need to remember back to their first sexual act / violation (viewing porn, touched, molested, incest, etc.) and describe the feelings that they felt and then ask Jesus to come to speak to them from His perspective.  If you were violated and don’t remember then just ask Jesus to let you know what happened – often a person blocks out their most egregious sexual traumas from their memories. Jesus will usually tell them that he was sorry that the person went through what they did and explain that He did not create them to have those sexual struggles for purity. So then the person needs to give their sexual soul wounds to Jesus and choose to forgive those who sexually affected them and ask Jesus to forgive them for their sexual sins, heal their wounds and then they can command the demons that attached to their souls to go to the pit.  Then they will feel cleansed and pure and will not have to struggle with the temptations or urges anymore.

This goes for both those who are heterosexual and homosexual. But they have to want to walk in sexual purity and freedom. God cannot override a person’s freewill to choose to live a sexually impure life but there will be eternal consequences for those who continue to choose to live out a sexually immoral lifestyle. When you actually want to be healed and delivered you can walk in a sexually pure lifestyle.  You can give your physical sexual desires to the Lord and if you are single you can resist the battle to masturbate as the Lord will take that fleshly desire away and allow you to walk in celibacy until you get married or re-married.  I know this first hand.

But the cowardly, unbelieving, abominable, murderers, sexually immoral, sorcerers, idolaters, and all liars shall have their part in the lake which burns with fire and brimstone, which is the second death.”

So you have a major incentive to pursue living a sexually moral and godly lifestyle, which is going to heaven and not hell.  If you are struggling to live a sexually pure life then go back to your first episode of being violated sexually and give your wounds to Jesus and receive from Him your sexual purity and childlike innocence.  Then walk in that purity for the rest of your life.  It is a wonderful feeling knowing that you are living a life congruent with the Lord and you will be blessed for your commitment to Jesus.  God gives us grace to give us time to get our soul wounds healed and delivered from demons but we need to take this seriously and not believe that God looks the other way and simply excuses our life full of sin.