GOD SEES WHAT YOU SEE, HEAR, SAY AND DO AND IT ALL MATTERS

It is not a popular message to confront people for their sin because it causes them to feel convicted but ultimately if it makes a difference whether they go to heaven or hell then they should be told the truth.  Sadly many pastors have watered down their messages so people will not leave their church and take their tithes with them. They don’t talk about the need for people to be set free from sin and living a godly life in obedience to the Bible. What does true salvation actually require?  Interesting if you Google salvation you will see this in Wikipedia:

Salvation (from Latin: salvatio, from salva, ‘safe, saved’) is the state of being saved or protected from harm or a dire situation. In religion and theology, salvation generally refers to the deliverance of the soul from sin and its consequences. The academic study of salvation is called soteriology.

So salvation means the deliverance of our souls (mind, will and emotions) from sin and its associated consequences.   So for those pastors who preach that we can just ask Jesus into our hearts with no fruit similar to Jesus as evidence and keep on practicing sin and still get to heaven – what does the Bible actually say?

15 What then? Shall we sin because we are not under law but under grace? Certainly not! 16 Do you not know that to whom you present yourselves slaves to obey, you are that one’s slaves whom you obey, whether of sin leading to death, or of obedience leading to righteousness? 17 But God be thanked that though you were slaves of sin, yet you obeyed from the heart that form of doctrine to which you were delivered. 18 And having been set free from sin, you became slaves of righteousness. 19 I speak in human terms because of the weakness of your flesh. For just as you presented your members as slaves of uncleanness, and of lawlessness leading to more lawlessness, so now present your members as slaves of righteousness for holiness.

20 For when you were slaves of sin, you were free in regard to righteousness. 21 What fruit did you have then in the things of which you are now ashamed? For the end of those things is death. 22 But now having been set free from sin, and having become slaves of God, you have your fruit to holiness, and the end, everlasting life. 23 For the wages of sin is death, but the gift of God is eternal life in Christ Jesus our Lord.

So grace gives us time to repent for our sin and live our lives in obedience to God and His Word but to do that requires that we walk through getting our soul wounds healed and delivered from the demons that torment us in our thoughts every day.  When we get hurt growing up (hurtful words and actions that we experienced – often from our dad or mom or step parent or anyone else – sexual violations, porn, molested, etc.) we will hear demonic voices in our thoughts causing us to believe their lies and getting us to not forgive those who hurt us which gives legal rights to the demons to torment.  That is why so many church people are controlling and mean to their spouse or anyone who does not do what they want.  It iw why so many church people are still living sinful lifestyles.  It is because they are unable to truly forgive those who have hurt them in their past.

14 “If you forgive those who sin against you, your heavenly Father will forgive you. 15 But if you refuse to forgive others, your Father will not forgive your sins. 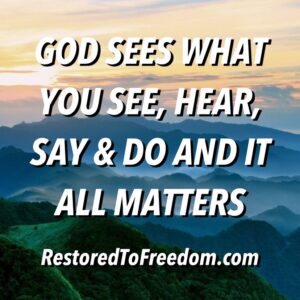 We will also walk in pride as the spirit of Leviathan in Job 41 states that he is “king over all the children of pride” in verse 34.  Pride got Lucifer kicked out of heaven and he became Satan and took one third of the angels with him so they could torment people on earth, especially those trying to be Christ followers.

Living by the Spirit’s Power

16 So I say, let the Holy Spirit guide your lives. Then you won’t be doing what your sinful nature craves. 17 The sinful nature wants to do evil, which is just the opposite of what the Spirit wants. And the Spirit gives us desires that are the opposite of what the sinful nature desires. These two forces are constantly fighting each other, so you are not free to carry out your good intentions. 18 But when you are directed by the Spirit, you are not under obligation to the law of Moses.

19 When you follow the desires of your sinful nature, the results are very clear: sexual immorality, impurity, lustful pleasures, 20 idolatry, sorcery, hostility, quarreling, jealousy, outbursts of anger, selfish ambition, dissension, division, 21 envy, drunkenness, wild parties, and other sins like these. Let me tell you again, as I have before, that anyone living that sort of life will not inherit the Kingdom of God.

22 But the Holy Spirit produces this kind of fruit in our lives: love, joy, peace, patience, kindness, goodness, faithfulness, 23 gentleness, and self-control. There is no law against these things!

24 Those who belong to Christ Jesus have nailed the passions and desires of their sinful nature to his cross and crucified them there. 25 Since we are living by the Spirit, let us follow the Spirit’s leading in every part of our lives. 26 Let us not become conceited, or provoke one another, or be jealous of one another.

Grace actually allows us time to repent for our sin, forgive those who hurt us, and then live a godly life with evidence of the fruit of the spirit instead of being taken out by God for our sin.  Do you remember Ananias and Sapphire in the book of Acts (after Jesus had come and died on the cross for our sin and then was raised again and then went to heaven)?  They lied and were in sin and then God immediately took their lives.

5 But there was a certain man named Ananias who, with his wife, Sapphira, sold some property. 2 He brought part of the money to the apostles, claiming it was the full amount. With his wife’s consent, he kept the rest.

3 Then Peter said, “Ananias, why have you let Satan fill your heart? You lied to the Holy Spirit, and you kept some of the money for yourself. 4 The property was yours to sell or not sell, as you wished. And after selling it, the money was also yours to give away. How could you do a thing like this? You weren’t lying to us but to God!”

5 As soon as Ananias heard these words, he fell to the floor and died. Everyone who heard about it was terrified. 6 Then some young men got up, wrapped him in a sheet, and took him out and buried him.

7 About three hours later his wife came in, not knowing what had happened. 8 Peter asked her, “Was this the price you and your husband received for your land?”

9 And Peter said, “How could the two of you even think of conspiring to test the Spirit of the Lord like this? The young men who buried your husband are just outside the door, and they will carry you out, too.”

10 Instantly, she fell to the floor and died. When the young men came in and saw that she was dead, they carried her out and buried her beside her husband. 11 Great fear gripped the entire church and everyone else who heard what had happened.

Sadly no one has any proper fear or respect for God anymore.  They believe that they can continue on with living a life full of sin and still get into heaven.  No you can’t.  God looks upon our hearts and our minds. If people would read the Bible for themselves then they would understand the truth instead of listening to lies being preached by people who are in sin themselves thinking nothing is wrong with it.  God sees everything that you watch, listen to, how you dress, if you are lusting after women or men, how you behave and it is time to repent for your sin before it is too late.  Yes God loves us, but we are the ones who choose to live in sin or to change and live a righteous life as He gives us freewill.  We choose heaven or hell.

26 Dear friends, if we deliberately continue sinning after we have received knowledge of the truth, there is no longer any sacrifice that will cover these sins. 27 There is only the terrible expectation of God’s judgment and the raging fire that will consume his enemies. 28 For anyone who refused to obey the law of Moses was put to death without mercy on the testimony of two or three witnesses. 29 Just think how much worse the punishment will be for those who have trampled on the Son of God, and have treated the blood of the covenant, which made us holy, as if it were common and unholy, and have insulted and disdained the Holy Spirit who brings God’s mercy to us. 30 For we know the one who said,

“I will take revenge. I will pay them back.”

“The Lord will judge his own people.”

31 It is a terrible thing to fall into the hands of the living God.

One Reply to “GOD SEES WHAT YOU SEE, HEAR, SAY AND DO AND IT ALL MATTERS”