When a person attends a church whose pastors don’t believe in the need of deliverance for their people the only recourse they have for their tormenting daily thoughts is to go to a doctor, psychologist or psychiatrist who will only prescribe medications and never help them get delivered from their tormenting demons. And many of the medications will have side effects such as depression and suicidal thoughts. So sadly many churches are being used by Satan to keep their people in torment and bondage and never allowing them to break free through inner healing and deliverance from demons.

Many couples who are struggling in their marriage will typically have one person who is more controlling, demanding, emotionally abusive and prideful who is operating in the spirit of Jezebel (or would be called a narcissist by the psychological community) who will act like they are godly in front of the church leaders while lying about their abused spouse. The abused spouse will try to speak the truth to the pastor or other counselors but often the abuser will paint a picture of lies that the counselor or pastor agree with causing more damage to the abused spouse. So sadly most counselors and pastors support the abuser instead of getting them healed from their soul wounds and delivered from their demons so they can enjoy peace and love in their marriage.

Thus the state of the typical church and pastors is favoring what Satan wants and that is that no one either believes that Christians can struggle with demonic thoughts, or that deliverance is only for the unsaved. If pastors and the churches believe this lie then the church attenders will stay hopeless, hurt and under the influence of demons and in bondage their entire lives. 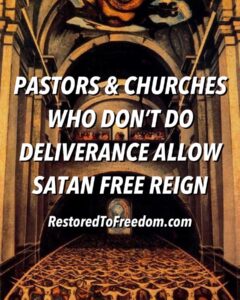 One third of Jesus ministry was deliverance and it was for those who followed His ministry. Deliverance was for those who believed in Jesus. Satan knows the truth that just because you ask Jesus into your heart doesn’t take away any demons legal rights to torment the person until they are able to take away the demons legal rights to torment them through forgiveness to all who hurt them, repentance for their pride and sin. Breaking addictions. They must go through a sanctification process to truly exhibit the fruit of the spirit. Otherwise they are now just a wounded, bitter, angry, sexually impure, prideful, addicted “Christian” that Satan still controls in their soul. Their mind, will and emotions are still being influenced by his demons until they take away the demonic legal rights to torment them.

Most churches preach that God’s grace allows us to keep living a sinful life and we will get into heaven by not changing but that is not what the Bible says. Grace allows us to live and not be killed immediately for our sin (like Ananias and Sapphira) and we don’t have to kill animals as a sacrifice for our sins as Jesus was our sacrifice. Grace does not remove the requirement for our need to repent and change from our sinful ways and live a holy life before the Lord.

“Pursue peace with all people, and holiness, without which no one will see the Lord: looking carefully lest anyone fall short of the grace of God; lest any root of bitterness springing up cause trouble, and by this many become defiled;” ‭‭Hebrews‬ ‭12:14-15‬ ‭NKJV‬‬

Even Wikipedia states clearly what salvation is:

Wikipedia: Salvation (from Latin: salvatio, from salva, ‘safe, saved’) is the state of being saved or protected from harm or a dire situation. In religion and theology, salvation generally refers to the deliverance of the soul from sin and its consequences.

Demons have legal rights to torment you if you refuse to forgive everyone who hurt you from your heart and if you don’t forgive yourself from making bad decisions in your life.

“Therefore, the Kingdom of Heaven can be compared to a king who decided to bring his accounts up to date with servants who had borrowed money from him. In the process, one of his debtors was brought in who owed him millions of dollars. He couldn’t pay, so his master ordered that he be sold—along with his wife, his children, and everything he owned—to pay the debt. “But the man fell down before his master and begged him, ‘Please, be patient with me, and I will pay it all.’ Then his master was filled with pity for him, and he released him and forgave his debt. “But when the man left the king, he went to a fellow servant who owed him a few thousand dollars. He grabbed him by the throat and demanded instant payment. “His fellow servant fell down before him and begged for a little more time. ‘Be patient with me, and I will pay it,’ he pleaded. But his creditor wouldn’t wait. He had the man arrested and put in prison until the debt could be paid in full. “When some of the other servants saw this, they were very upset. They went to the king and told him everything that had happened. Then the king called in the man he had forgiven and said, ‘You evil servant! I forgave you that tremendous debt because you pleaded with me. Shouldn’t you have mercy on your fellow servant, just as I had mercy on you?’ Then the angry king sent the man to prison to be tortured until he had paid his entire debt. “That’s what my heavenly Father will do to you if you refuse to forgive your brothers and sisters from your heart.” ‭‭Matthew‬ ‭18:23-35‬ ‭NLT‬‬

So shall we continue to live a sinful life cause of God’s grace and no longer under the law of the Old Testament?

What then? Shall we sin because we are not under law but under grace? Certainly not! Do you not know that to whom you present yourselves slaves to obey, you are that one’s slaves whom you obey, whether of sin leading to death, or of obedience leading to righteousness? But God be thanked that though you were slaves of sin, yet you obeyed from the heart that form of doctrine to which you were delivered. And having been set free from sin, you became slaves of righteousness. I speak in human terms because of the weakness of your flesh. For just as you presented your members as slaves of uncleanness, and of lawlessness leading to more lawlessness, so now present your members as slaves of righteousness for holiness. For when you were slaves of sin, you were free in regard to righteousness. What fruit did you have then in the things of which you are now ashamed? For the end of those things is death. But now having been set free from sin, and having become slaves of God, you have your fruit to holiness, and the end, everlasting life. For the wages of sin is death, but the gift of God is eternal life in Christ Jesus our Lord.” ‭‭Romans‬ ‭6:15-23‬ ‭NKJV‬‬

So if you are attending a church whose pastors come against deliverance for you then why are you attending it? The pastors are literally coming against what Jesus did. They are actually coming against what God knows that every true believer needs. It is time for every believer to choose deliverance, including every pastor and their spouse, everyone. If your church or pastor lies to you about needing deliverance then it is time to move on. Never come under the leadership of anyone who comes against the need for deliverance because they are being used by Satan to do his works to keep you in bondage and sin. Rise up and submit yourself to Jesus and choose to get healed from your soul wounds and delivered from your demons so that you can live a life full of the fruit of the spirit and not the flesh.

Dear children, don’t let anyone deceive you about this: When people do what is right, it shows that they are righteous, even as Christ is righteous. But when people keep on sinning, it shows that they belong to the devil, who has been sinning since the beginning. But the Son of God came to destroy the works of the devil. Those who have been born into God’s family do not make a practice of sinning, because God’s life is in them. So they can’t keep on sinning, because they are children of God. So now we can tell who are children of God and who are children of the devil. Anyone who does not live righteously and does not love other believers does not belong to God.” ‭‭1 John‬ ‭3:7-10‬ ‭NLT‬‬

If anyone teaches otherwise and does not consent to wholesome words, even the words of our Lord Jesus Christ, and to the doctrine which accords with godliness, he is proud, knowing nothing, but is obsessed with disputes and arguments over words, from which come envy, strife, reviling, evil suspicions, useless wranglings of men of corrupt minds and destitute of the truth, who suppose that godliness is a means of gain. From such withdraw yourself.” ‭‭I Timothy‬ ‭6:3-5‬ ‭NKJV‬‬