EMOTIONAL ABUSE IS THE SILENT KILLER OF MARRIAGES IN THE CHURCH

EMOTIONAL ABUSE IS THE SILENT KILLER OF MARRIAGES IN THE CHURCH

No one wants to address the 800 lb gorilla in every church in the world. Satan wants to force people to stay in marriages where one person is the abuser and the other person is their victim behind closed doors. The church sadly is filled with many religious people controlled by demons screaming that “God hates divorce” in order to keep the abused victims chained to their abusers for life until they die unable to do much of anything for Christ yet they stay silent on “God hates abuse in marriage which causes divorce.”

So those who are controlling, manipulative, coercive, prideful, evil, demanding and destructive get away with slowly killing their spouse by tormenting them into sickness and disease through constant emotional abuse over years resulting in their victim’s hair loss, weight gain or loss, depression, suicidal thoughts, and lack of any true sexual intimacy often developing into sexual abuse. There are many men and women who demand their spouse obey them like a slave behind closed doors instead of loving them like Christ while acting like they are such a loving and doting spouse in front of church people. Many are pastors, pastor wives, worship leaders, Intercessors, security, even on the deliverance team. Emotional abuse doesn’t leave the immediate marks as physical abuse but over time is just as deadly.

These abusers were all hurt and wounded when growing up and have demons who give them hundreds and thousands of thoughts a day in order to control their spouse to the point of death in a very real sense. Those who have never been married to a narcissist / Jezebel spirit filled person have no idea how horrible the daily abuse is and have no rights to give any advice because they have no clue and are often used by demons to condemn the victim and support the abusive spouse. The abusive spouse knows how to act charismatic and turn on the charm to others while acting like they are the victim in the relationship. Often the church leaders will support the abusers and come against the true victim which re-victimizes the abused spouse because the church leaders have the same demons as the abuser. 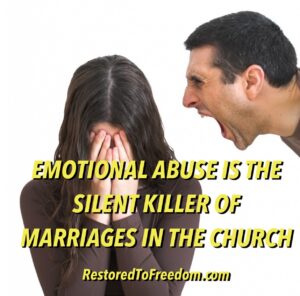 What needs to happen is to have the pastors of the church teach people how to get their soul wounds healed and delivered from their demons and then the abusive spouse would at least have a chance of getting healed and freed and there would be no need for divorce. Then the children of the abusers would not get wounded and hurt by their abusive parent and give rights to demons to torment them and continue on for another generation.

We have seen thousands of lives changed and marriages healed through soul wound healing and deliverance around the world as the truth sets people free. If the church continues to lie to people about them not having demons then the divorce rate will stay as high as ever because people will not change. You cannot medicate or counsel out demons from people as the demons will keep their legal rights to stay due to unforgiveness in the abusive person.

We are seeing an increase in people around the world watching TikTok and learning about the need to get their soul wounds healed and deliverance as they are realizing that their past soul wounds have allowed demons legal rights to torment them and they want to experience peace through deliverance.

“And you shall know the truth, and the truth shall make you free.” ‭‭John‬ ‭8‬:‭32‬ ‭NKJV‬‬