The Americanized church tells us that all you have to do to be saved and go to heaven is to say the prayer to ask Jesus into your heart without going through the process of forgiveness to those who sinned against you and deliverance from your own pride and sin.

Interestingly even Wikipedia states: In religion and theology, salvation generally refers to the deliverance of the soul from sin and its consequences.

The truth is that when we make a decision to become a Christian like Jesus then we need to actually end up having similar fruit like Jesus had. Of course if we die the day after we decide to serve Christ then we don’t really have time to show our fruit just like the thief on the cross next to Jesus. But for everyone else who has been attending church for years our fruit of our lives should be closely aligned with Jesus if we are authentic Christians, understanding it’s a process of sanctification.

In order to have similar fruit to Jesus in our lives we need to do what Jesus did and that is to forgive everyone who ever sinned against us and hurt us. As Jesus was dying on the cross He said “Father forgive them they know not what they do.”

Most Christians have not completely forgiven those who hurt them and thus demons still have legal rights to torment them in their thoughts and emotions (soul) which cause them to trigger in anger and sin. Demons also cause our bodies to have infirmities such as sickness and disease. 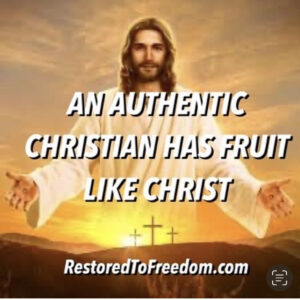 Unforgiveness is now classified in medical books as a disease. According to Dr. Steven Standiford, chief of surgery at the Cancer Treatment Centers of America, refusing to forgive makes people sick and keeps them that way.

With that in mind, forgiveness therapy is now being used to help treat diseases, such as cancer.

“It’s important to treat emotional wounds or disorders because they really can hinder someone’s reactions to the treatments, even someone’s willingness to pursue treatment,” Standiford explained.

Of all cancer patients, 61 percent have forgiveness issues, and of those, more than half are severe, according to research by Dr. Michael Barry, a pastor and the author of the book, The Forgiveness Project.

“Harboring these negative emotions, this anger and hatred, creates a state of chronic anxiety,” he said.

“Chronic anxiety very predictably produces excess adrenaline and cortisol, which deplete the production of natural killer cells, which is your body’s foot soldier in the fight against cancer,” he explained.

Barry saif the first step in learning to forgive is to realize how much we have been forgiven by God.

“When a person forgives from the heart  which is the gold standard we see in Matthew 18, forgiveness from the heart  we find that they are able to find a sense of peacefulness. Quite often our patients refer to that as a feeling of lightness,” he said.

Barry said most people don’t realize what a burden anger and hatred were until they let them go.

Also a September, 2011 study from Concordia University has found constant bitterness can make a person ill. Holding on to bitterness can affect metabolism, immune response or organ function and lead to physical disease, researchers say.

So when we forgive we literally take away demons legal rights from tormenting us. Many have thousands of negative demonic thoughts a day due to unforgiveness.

In 2005, the National Science Foundation published an article summarizing research on human thoughts per day. It was found that the average person has about 12,000 to 60,000 thoughts per day. Of those thousands of thoughts, 80% were negative, and 95% were exactly the same repetitive thoughts as the day before. We can see that one of the tendencies of the mind is to focus on the negative and ‘play the same songs’ over and over again.

Pride will also cause Christians to not behave like Christ but more like Satan. People who get hurt growing up will develop pride which tells them that they need to make every decision, never trust anyone including God and that their own spouse needs to do everything they tell them. The spirit of Leviathan (Job 41) is king over all the children of pride (Job 41:34). Pride will keep you out of heaven – Lucifer got kicked out of heaven for his pride. So we need to repent for our pride to remove legal rights of demons from giving us thoughts and then acting upon them.

Also living a sinful life is not Christlike and can keep you out of heaven. Sin should be rare in a true Christian’s life.

“I say then: Walk in the Spirit, and you shall not fulfill the lust of the flesh. For the flesh lusts against the Spirit, and the Spirit against the flesh; and these are contrary to one another, so that you do not do the things that you wish. But if you are led by the Spirit, you are not under the law. Now the works of the flesh are evident, which are: adultery, fornication, uncleanness (unholy), lewdness (sexually impure / lustful), idolatry, sorcery, hatred, contentions, jealousies, outbursts of wrath, selfish ambitions, dissensions (strife, conflict, contention), heresies (denial of a core doctrine of Christian faith) , envy, murders, drunkenness, revelries (partying), and the like; of which I tell you beforehand, just as I halso told you in time past, that those who practice such things will not inherit the kingdom of God.

But the fruit of the Spirit is love, joy, peace, longsuffering, kindness, goodness, faithfulness, gentleness, self-control. Against such there is no law. And those who are Christ’s have crucified the flesh with its passions and desires. If we live in the Spirit, let us also walk in the Spirit. Let us not become conceited, provoking one another, envying one another.” ‭‭Galatians‬ ‭5:16-26‬ ‭NKJV‬

““Not everyone who says to Me, ‘Lord, Lord,’ shall enter the kingdom of heaven, but he who does the will of My Father in heaven. Many will say to Me in that day, ‘Lord, Lord, have we not prophesied in Your name, cast out demons in Your name, and done many wonders in Your name?’ And then I will declare to them, ‘I never knew you; depart from Me, you who practice lawlessness!’” ‭‭Matthew‬ ‭7:21-23‬ ‭NKJV‬‬

“Whoever commits sin also commits lawlessness, and sin is lawlessness. And you know that He was manifested to take away our sins, and in Him there is no sin. Whoever abides in Him does not sin. Whoever sins has neither seen Him nor known Him. Little children, let no one deceive you. He who practices righteousness is righteous, just as He is righteous. He who sins is of the devil, for the devil has sinned from the beginning. For this purpose the Son of God was manifested, that He might destroy the works of the devil. Whoever has been born of God does not sin, for His seed remains in him; and he cannot sin, because he has been born of God. In this the children of God and the children of the devil are manifest: Whoever does not practice righteousness is not of God, nor is he who does not love his brother.” ‭‭I John‬ ‭3:4-10‬ ‭NKJV‬‬

“What then? Shall we sin because we are not under law but under grace? Certainly not! Do you not know that to whom you present yourselves slaves to obey, you are that one’s slaves whom you obey, whether of sin leading to death, or of obedience leading to righteousness? But God be thanked that though you were slaves of sin, yet you obeyed from the heart that form of doctrine to which you were delivered. And having been set free from sin, you became slaves of righteousness. I speak in human terms because of the weakness of your flesh. For just as you presented your members as slaves of uncleanness, and of lawlessness leading to more lawlessness, so now present your members as slaves of righteousness for holiness. For when you were slaves of sin, you were free in regard to righteousness. What fruit did you have then in the things of which you are now ashamed? For the end of those things is death. But now having been set free from sin, and having become slaves of God, you have your fruit to holiness, and the end, everlasting life. For the wages of sin is death, but the gift of God is eternal life in Christ Jesus our Lord.” ‭‭Romans‬ ‭6:15-23‬ ‭NKJV

‬ “For if we sin willfully after we have received the knowledge of the truth, there no longer remains a sacrifice for sins, but a certain fearful expectation of judgment, and fiery indignation which will devour the adversaries. Anyone who has rejected Moses’ law dies without mercy on the testimony of two or three witnesses. Of how much worse punishment, do you suppose, will he be thought worthy who has trampled the Son of God underfoot, counted the blood of the covenant by which he was sanctified a common thing, and insulted the Spirit of grace? For we know Him who said, “Vengeance is Mine, I will repay,” says the Lord. And again, “The Lord will judge His people.” It is a fearful thing to fall into the hands of the living God.” ‭‭ Hebrews‬ ‭10:26-31‬ ‭ NKJV‬‬

So to be a real Christian requires that we forgive all who hurt us, repent for our pride and sin and then command demons to go to the pit. Then we will be able to walk in the fruit of the spirit, humility, and sexual purity like Jesus did.