The Jerusalem Post – Priest Gerald Johnson from Michigan claimed to have visited Hell after suffering a heart attack and said the experience changed his life forever. “I wouldn’t wish it on my worst enemy,” he said.

Johnson posted his claims in a series of TikToks and claimed that he was sent to Hell in February of 2016 after his heart attack. In one of his more viral videos, which got 3.7 million views, Johnson said that he indeed saw real Hell. “I was there and I wouldn’t wish it on my worst enemy. I don’t care what he did to me. No one deserves that.”

The priest from Michigan described the moment when he was launched to the center of the Earth where he says Hell is.

“My spirit left my physical body, and I thought I was on my way up [to Heaven],” he remembered. “I thought I did so much good during my life and that I helped so many people, but even so, I went down [to Hell]. I entered the very center of the Earth. The things I saw there are indescribable. It brings up so many difficult feelings when I talk about it.”

So what happens in hell? Johnson, a priest of seven years, described some of the things he witnessed when he visited Hell including a man “walking on all fours like a dog and getting burned from head to toe. His eyes were bulging and worse than that: He was wearing chains on his neck. He was like a hellhound. There was a demon holding the chains.” He added that “like telepathically, I knew that the demon was sent in this man’s life to ride him from his childhood to his death.” Johnson explained that the demon knows if he succeeds in making people not serve God and do bad things, he will overpower them in Hell where they will be his slaves.

Johnson continued, adding that there is a section of Hell where music is played. He says he heard songs there like Rihanna’s “Umbrella” and Bobby McFerrin’s “Don’t Worry Be Happy”. Sounds nice, right? No. He said that it’s not the original artists who sing the songs, but a group of demons that use the words to torture us. He added that “every word of every song was made to torture you for the fact that you didn’t worship God through music while you were on Earth.” To end, Johnson revealed how he escaped Hell and returned to Earth. 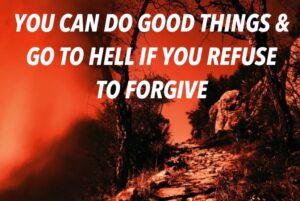 “I was angry with God because I did so much good in my life and ended up in Hell,” he said. “I rose up out of Hell and returned to Earth – and God spoke to me. He said ‘ you were secretly angry with people who harmed you, you hoped I would punish them. These are not your people. These are My people. I just want you to focus on the task I give you.’ Even though I did good, the thing I had in my heart was a lack of forgiveness for the people who wronged me. “A man who cannot forgive is a man who forgot that he was forgiven. That is my experience from Hell. It’s a completely real place.”

“If you forgive those who sin against you, your heavenly Father will forgive you. But if you refuse to forgive others, your Father will not forgive your sins.” ‭‭Matthew‬ ‭6‬:‭14‬-‭15‬ ‭NLT‬‬

“Then Peter came to him and asked, “Lord, how often should I forgive someone who sins against me? Seven times?” “No, not seven times,” Jesus replied, “but seventy times seven! “Therefore, the Kingdom of Heaven can be compared to a king who decided to bring his accounts up to date with servants who had borrowed money from him. In the process, one of his debtors was brought in who owed him millions of dollars. He couldn’t pay, so his master ordered that he be sold—along with his wife, his children, and everything he owned—to pay the debt. “But the man fell down before his master and begged him, ‘Please, be patient with me, and I will pay it all.’ Then his master was filled with pity for him, and he released him and forgave his debt. “But when the man left the king, he went to a fellow servant who owed him a few thousand dollars. He grabbed him by the throat and demanded instant payment. “His fellow servant fell down before him and begged for a little more time. ‘Be patient with me, and I will pay it,’ he pleaded. But his creditor wouldn’t wait. He had the man arrested and put in prison until the debt could be paid in full. “When some of the other servants saw this, they were very upset. They went to the king and told him everything that had happened. Then the king called in the man he had forgiven and said, ‘You evil servant! I forgave you that tremendous debt because you pleaded with me. Shouldn’t you have mercy on your fellow servant, just as I had mercy on you?’ Then the angry king sent the man to prison to be tortured until he had paid his entire debt. “That’s what my heavenly Father will do to you if you refuse to forgive your brothers and sisters from your heart.”” ‭‭Matthew‬ ‭18‬:‭21‬-‭35‬ ‭NLT‬

Linked here is the TikTok interview with Gerald Johnson from Michigan who went to hell – https://www.tiktok.com/t/ZTRpaT2K3/